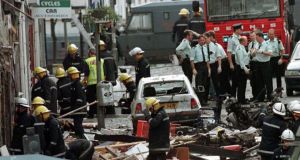 The aftermath of the Omagh bombing in Co Tyrone on August 15, 1998

The North’s Attorney General John Larkin needed his thick neck and broad back for the metaphorical blows that rained down on him yesterday and that will continue to assail him.

His proposal that there should be no further prosecutions, investigations, inquests or inquiries into the Troubles killings that took place up until the signing of the Belfast Agreement in April 1998 sent shockwaves throughout Northern Ireland and farther afield.

Relatives of victims
Many still deeply hurting families, parents, brothers and sisters, extended relatives and friends were appalled at his radical suggestion.

The response brought to mind the angry reaction that greeted the proposal that the families of all those killed in the Troubles should each receive a “recognition payment” of £12,000 – an idea that scuppered the thoughful Eames-Bradley proposals on how to deal with the past. Dennis Bradley and Lord Eames ended up as target practice for politicians and victims for a long time and similarly it is now open season on Larkin.

Larkin spoke of the logic of his proposal and there is indeed logic.

But often reason will not trump the perfectly understandable emotional response of victims.

Some support
The criticism came from all sides, from victims of republican and loyalist paramilitaries, from those killed by the British army and RUC, from relatives of those killed in Omagh, on Bloody Sunday, in Shankill, in Enniskillen, from Pat Finucane’s family . . . and on it went and on it will go.

But there were some words of support, from the likes of former Northern Ireland secretary Peter Hain and Basil McCrea and John McCallister of the new NI21 party who contended that desperately difficult realities must be confronted and that the past should not have a stranglehold on the present and future.

At some stage emotions will settle a little and perhaps then there will be more careful consideration of Larkin’s proposal.

Centrally, he is making a distinction between inquiry and prosecution, and the truth. Prosecution just will not or cannot work because of the passage of time, he suggests, but that does not mean the truth cannot emerge.

Could his proposal open the door for groups like the IRA, the loyalist paramilitaries and the British security services, liberated from the fear of prosecution, to be more forthcoming?

They haven’t been up until now despite all their gilded talk, but what excuse would they have for not helping victims find truth were Larkin’s proposal – or some moderated form of it – adopted.

The timing of his comments is very interesting. They come as US diplomat Dr Richard Haass edges into the most intensive part of his talks aimed at achieving agreement on parades, flags and the past by Christmas.

Did Larkin issue his bombshell proposal in a vacuum? It’s something you would not rule out considering the very independent nature of the Attorney General, which he has clearly and controversially demonstrated on occasions.

Remarkable
But if there is some undisclosed backroom-prepared choreography here, his proposal will be even more groundbreaking and remarkable.

The DUP said the Northern Executive was not briefed on his comments, and that surely is the case. But equally it would be surprising were this totally a solo run.

What Larkin has proposed is certainly brave to the point almost of recklessness but whether it is wise will take time to determine.

At the very least he has catapulted a never-ending debate that takes place mostly in the background to the forefront of political and community discourse. Some variation of his proposal may yet be the way forward.