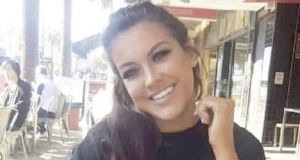 Nurse Aoife McGivney who came to the aid of a Dublin Bus driver who suffered a suspected heart attack on Monday.

The nurse who helped save the life of the Dublin Bus driver who suffered a heart attack while driving through the city centre on Monday has urged people to undergo basic first aid training so they know how to react in an emergency.

Aoife McGivney, from Ballinteer in Dublin, administered CPR to a bus driver on Monday morning after the driver fell unconscious and lost control of the bus.

Ms McGivney was sitting in the downstairs area of the number 16 Dublin Bus listening to music on her way to work at the Mater Hospital when she realised the bus had broken a red light and was continuing to roll down Westmoreland Street towards O’Connell Bridge.

“We crashed into a cyclist and we could feel the bus going over the bike,” Ms McGivney told The Irish Times. “We thought there was someone under the bus so everyone started screaming.”

Ms McGivney approached the front of the bus where she discovered the driver was unconscious. She tried shaking the man to lift his foot from the accelerator and eventually succeeded in moving his leg which allowed the bus to roll to a halt. Meanwhile, a man outside the bus had pulled the emergency lever to open the bus doors.

“I said we needed to get the driver onto flat ground or his heart was going to stop. We got him outside the bus and into the recovery position but then I found he had stopped breathing and gone into cardiac arrest. I started CPR and asked people to call an ambulance.”

Ryan's chatting to heroic nurse Aoife McGivney who saved the life of a bus driver who suffered a heart attack while driving through rush-hour traffic in Dublin yesterday @RTERadio1 #DublinBus #CPR pic.twitter.com/3tnWvx9R98

Ms McGivney said she administered a number of cycles of CPR to the man before swapping positions with a passer-by who knew first aid.

A garda who was on the scene also helped with the CPR. She says the ambulance arrived within 10 minutes and transported the man to the Mater Hospital.

“I know this doesn’t happen often but those few minutes of time you get are so important,” said Ms McGivney who works in the ear, nose and throat department of Mater Hospital. “It’s important that people aren’t afraid to jump in and help, to be able to do something and not have to wait for the ambulance.”

Ms McGiveney said she struggled to sleep last night and was quite shaken by Monday’s incident. She is planning to visit the Dublin Bus driver in hospital and hopes he makes a speedy recovery.

“I’m so lucky I had my training behind me and knew what to do. The real hereos are the nurses and fire fighters who have to do this every day.”

A Garda spokesman confirmed the driver was still in hospital where it is understood he remains in a stable condition. The cyclist hit by the bus was taken to hospital as a precaution but suffered only minor injuries.

A spokeswoman for Dublin Bus said all drivers were trained in “comprehensive procedures” for dealing with these types of emergency situations.

All vehicles are equipped with a radio which connects with the Dublin Bus central control centre who in turn contact the emergency services, she said.

Gardaí are investigating the incident.

Tánaiste shares outrage of the Opposition at killing of George Floyd in the US 20:03
Several weeks of rain needed to replenish Irish Water supplies 19:47
Mother of three (41) who had to fundraise for her own cancer treatment has died 19:43
Which cars are bad for environment? Irish consumers are confused 19:31
Varadkar offers Independents Jackie Healy-Rae style deal to support coalition 19:22