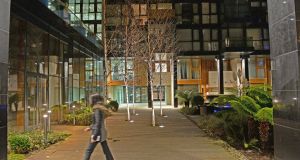 Owners of almost 900 apartments in south Dublin say they are being shut out of a €750-million Government scheme which had been billed as a potential lifeline for owners of apartments facing fire-safety defects.

The owners of the apartments at Beacon South Quarter in Dublin, which was found to have fire safety issues that will cost more than €10 million to fix, had hoped to apply for a loan from the Government’s new Home Building Finance Ireland (HBFI) fund.

Kath Cottier, chairwoman of the owners’ management company, said this was “on foot of clear indications from legislators and the Department of Finance that such a route could be open [for] remediation works”, but the HBFI financing had proved to be “a complete blind alley for us”.

She said the company also now believed HBFI financing was prohibitively expensive. Ms Cottier said the cost of the loans, which would attract an interest rate of up to 8 per cent, would prove prohibitive.

At 8 per cent, she said, a HBFI loan would cost apartment owners an additional €200,000. She also said the fund did not appear to be interested in lending for remediation works.

This, Ms Cottier said, was contrary to indications given by policymakers and Ministers last year.

In advice forwarded to the management company by Minister for Culture Josepha Madigan last year – in whose Dublin Rathdown constituency the development is located – the Department of Finance said “there is nothing contained in the [HBFI] legislation that would prevent such a funding application being considered”.

In response to a Dáil question in December, Minister for Finance Paschal Donohoe told Fine Gael TD for Clare Joe Carey that HBFI would be in a position to consider applications for works on latent defects in January of this year. Mr Carey later issued a press release stating the fund could be used to pay for remediation works at projects affected by issues in his constituency.

However, it is understood there are significant misgivings within HBFI about giving loans for remediation works. Sources said the fund had indicated it had concerns about lending for remediation projects due to the risk of costs outstripping budgets, the lack of security for the loan –as owners’ management companies generally have no assets – and the possibility of raising State aid issues.

A spokesman for HBFI emphasised that the fund was focusing on lending for new units. He said the fund will provide loans to builders subject to certain terms and conditions, including the size of the new development and the planning status of a project.

“Applications that do not meet these terms and conditions are unlikely to meet State aid rules or be commercially viable.”

As a result, the Beacon apartment owners have now decided against applying for the loan.

The management company expressed dismay that a HBFI loan was now out of its reach, as it had been their main hope for financing remediation works.