Queen and McGuinness to meet at former jail during visit 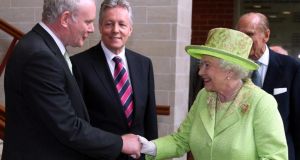 Queen Elizabeth is to meet Martin McGuinness for the third time, tomorrow. They first shook hands in Belfast in 2012. Photograph: Paul Faith/PA Wire

Queen Elizabeth today begins a three-day visit to Northern Ireland when she will for the third time meet former IRA leader and Sinn Féin Deputy First Minister Martin McGuinness – this time in one of her former prisons.

The British monarch and her husband Prince Philip, the Duke of Edinburgh, will participate in a fairly busy programme of events between today and Wednesday. Venues for the visit include Crumlin Road jail in north Belfast, the Game of Thrones set in Titanic Quarter and Belfast City Hall.

Her meeting with Mr McGuinness will take place tomorrow at the museum at the former Crumlin Road jail where many IRA members and loyalist paramilitaries were imprisoned during the early part of the Troubles.

Mr McGuinness spent five to six weeks on remand at the prison during the early 1970s.

Mr McGuinness and First Deputy Peter Robinson will also meet the Queen this afternoon at an event at Hillsbrough Castle.

The queen and Prince Philip also will be guests of honour at the Northern Secretary, Theresa Villiers’ garden party at Hillsborough Castle tomorrow which will be attended by more than 1,800 guests.

On Wednesday they will take part in first World War commemorations in Coleraine, Co Derry, hosted by the borough council.

There will be considerable focus on Mr McGuinness meeting Queen Elizabeth but considering this will be their third encounter it is unlikely to generate the same headlines as before.

The venue for the meeting, however, will spark interest considering it was the site where many republicans spent time in “her majesty’s prison”.

The groundbreaking meeting was in 2012 when Queen Elizabeth met, spoke and shook hands with Mr McGuinness at the Lyric Theatre in Belfast. In April this year Mr McGuinness attended a banquet at Windsor Castle which was held as part of President Michael D Higgins’s state visit to Britain. At the function he joined in a toast to the queen.

Of this visit Mr McGuinness said he would be meeting the queen “as a representative of all our people”.

“The visit by Queen Elizabeth is an opportunity to demonstrate mutual respect and to further build on the process of reconciliation,” he said.

“Despite the current difficulties, I am determined to provide positive, forward-thinking political leadership.”