Q&A: Latest in the ebb and flow of water charges saga 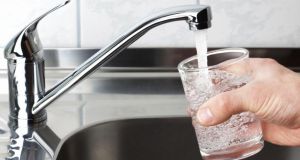 What will happen if you can’t afford to pay water charges? “An attachment order could be made to your wages or social welfare payments. To take money from people on social welfare would be very controversial, not to mention unfair.” File photograph: Getty Images/iStockphoto

Irish Water and its bills are in the news again?

Yes. This time the story is about how a utility that does not have the power to cut anyone off can make them pay. Originally the plan was to cut the water supply of non-payers to a trickle, but that wasn’t a runner, so Irish Water and the Government have had to think of something else.

Does this mean non-payers will be hauled before the courts and face jail?

No. The proposals are not fully formed but there appears to be an anxiousness by the Government to avoid just that scenario. People being jailed for non-payment would be, to quote a judge from another jurisdiction, an appalling vista. It would be disastrous PR, and the courts could not cope with the flood of cases. Then there is the stupidity element.

The fines and debts system in the Republic is not working. At present people can - and are - jailed for non-payment of fines. They can be put in prison for periods of no more than two hours, which means the cost of the punishment far exceeds the fine.

So what will happen if you can’t afford to pay?

An attachment order could be made to your wage or social welfare payments. To take money from people on social welfare would be very controversial, not to mention unfair. The Government has been anxious to intimate that the proposal will differentiate between those who cannot pay and those who will not pay. It is against international law to jail someone for not paying a fine or debt they cannot pay.

A set of compliance measures has been drafted and they include attachment orders on wages and welfare payments, and giving landlords the power to take water charges from deposits of tenants. It will also be possible to attach unpaid charges to homes so a homeowner will not be able to sell their home until they pay.

And what are the penalties?

Late payment penalties of €30 for single households and €60 for others can be applied to non-paying customers after the first year of non-payment. After that, the fines double to €60 and €120, and in the third year it will increase €120 and €240. After the fourth year that will rise to €180 and €360. But the penalties do not come in for 15 months.

4 Air pollution in Dublin reaches back to smoky coal days