Put Aviation Authority in charge of search and rescue - report 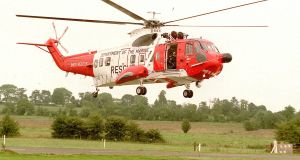 A report into civil search and rescue flights has found a ‘disconnect’ between agencies with regards to whois responsible for safety and legal oversight. Photograph: The Irish Times

The Irish Aviation Authority (IAA) should be “formally and clearly” assigned responsibility for legal and safety oversight of civil search and rescue flights, according to a Government review.

The report, commissioned by Minister for Transport Shane Ross, found a “disconnect” between key players with regards to who was responsible for safety and legal oversight.

It also recommends the IAA works with the Irish Coast Guard to ensure consistency in regulations, and says all agencies involved in search and rescue - including tasking staff and medical professionals - should be integrated into the safety management systems run by the helicopter operator, CHC Ireland.

Mr Ross said he “accepts in full” all 12 recommendations in the review, which arose out of, but has no involvement in the continuing investigations into the Rescue 116 helicopter crash last year.

The AAIU’s interim report recommended Mr Ross carry out a thorough review of search and rescue aviation operations in Ireland.

The oversight review was completed in August and forwarded to the Air Accident Investigation Unit (AAIU) to ensure it did not jeopardise any other element of its ongoing investigation.

Mr Ross noted it benefited from input from SAR authorities in Iceland, Finland, Spain Sweden and Australia and he wished to thank them for their assistance.

The AAIU is continuing its work on the final report into the Rescue 116 crash, while the Garda and Health and Safety Authority are working jointly on a separate inquiry.

1 Trump threatens to ‘close down’ social media companies after Twitter fact-check
2 Binoculars at the ready: Elon Musk rocket to be seen in Irish skies tonight
3 Holohan tells ministers no immediate change to two-metre rule
4 Ancient Roman mosaic floor discovered under vines in Italy
5 Sil Fox tells of ‘months of hell’ as he is cleared of sex assault on woman in bar
Real news has value SUBSCRIBE