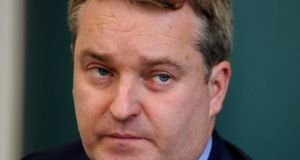 Robert Watt, secretary general of the Department of Public Expenditure and Reform, made the comments during an email exchange with David McRedmond, chief executive of An Post. Photograph: Aidan Crawley

One of the State’s most senior civil servants has said the public service has “hundreds of offices and thousands of civil servants providing outdated, inefficient and very expensive” services.

Robert Watt, the secretary general of the Department of Public Expenditure and Reform, made the comments during an exchange on the merits and potential risks of shifting large amounts of public services online.

In emails between Mr Watt and the chief executive of An Post, David McRedmond, earlier this year, Mr Watt was warned that a shift online risked disadvantaging some citizens.

The An Post chief executive urged that “consideration is also being given to the needs of the offline citizen. In our view, it is essential that those who are unable or unwilling to engage with online Government services are not disadvantaged or left behind.”

In response, Mr Watt wrote: “We are pushing ahead with digital strategy as you are aware – I don’t know what is meant by offline strategy. We have hundreds of offices and thousands of civil servants providing outdated, inefficient and very expensive channels when most citizens want [a] better digital offering.”

Mr McRedmond reiterated that some people could be hurt by a wholesale switch to accessing services online, and argued that post offices could offer more services. “Many people cannot or will not [for a time at least] conduct business online. Post offices are there so why not use them to provide the full range of services?”

The emails were released under the Freedom of Information Act. Following the exchange, a meeting was held between the two men and the Government’s chief information officer to discuss the Government’s digital agenda, a spokeswoman for the department said.

Asked whether Mr Watt’s comments were made in a personal capacity or represented a department view, the spokeswoman said the Government was “investing heavily in digital and as we see the growing take-up of online services, inevitably, footfall will drop in the offline or face-to-face services”.

“Just as the impact of customer choices is being felt in other sectors, such as banking, retail, travel, etc, public services will respond to customer demands and move services to a digital offering.”

The spokeswoman added that investment in offline services should be done only “where those services can actually improve the customer experience in terms of convenience [location and opening hours] and service quality”.

The State’s national digital strategy, which was originally launched in 2013, has already seen significant elements of public service provision move online. Passport renewals, tax assessments and welfare payments now have extensive online portals. In addition to this, the Government has launched MyGovID as an online point of access for many Government services, and recently launched a single gov.ie website. The State has also rolled out an open data programme.

The civil service management board recently began a high-level workforce planning exercise, which will take place over the next five to 10 years, to ascertain the impact of digitalisation, artificial intelligence, process automation and other technological developments on the types of skills needed in the civil service in the future.

The Government last year launched a public consultation on the next stage of the digital strategy, which will “seek to support and shape the impact of technology for good and manage the transformation in an inclusive and citizen-centred way”.

Responses to the strategy included calls for the speedy rollout of the National Broadband Plan, which has been the target of criticism from Mr Watt’s department before, which argued that the €3 billion public subsidy for the scheme did not represent good value for money.