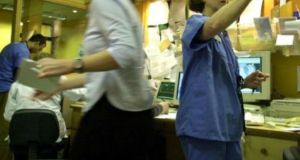 As things stand at present the Government is heading towards confrontation with more than 40,000 nurses early in the New Year.

The leadership of the Irish Nurses and Midwives Organisation (INMO) and the Psychiatric Nurses Association (PNA) will meet in early January to decide on the timing of any industrial action.

The INMO has said it is looking at potentially a number of 24-hour stoppages. These seem likely to take place in January which is traditionally one of the most challenging months of the year for the health service.

However the commission argued that there was no generalised recruitment and retention problem and suggested instead a €20 million package of increased allowances in certain areas could address localised difficulties.

Nurses are seeking across-the-board rises of about 12 percent to bring their pay into line with that of other graduate-entry groups such as physiotherapists . This pay difference has been a long-standing grievance for nurses.

The INMO has contended that under the current public service pay deal the Government could agree to rises to deal with recruitment and retention problems without this triggering knock-on claims across the broader public service.

However the Government strongly disagrees.

The Minister for Public Expenditure Paschal Donohoe has argued that meeting the nurses’ demands would cost about €300 million.

He said last month that conceding to the nurses’ demands “would compromise public pay and budgetary policy and would also generate follow-on claims from the rest of the public service workforce, where there are already other known pay grievances”.

The group which oversees the implementation of the public service agreement is expected to consider the planned strikes and the INMO contention that a special deal for nurses would not lead to knock-on claims at a meeting after Christmas.

The Government is likely to argue that already, the country’s largest public service union Fórsa has warned of claims by other healthcare staff if nurses secured additional pay awards over and above those set out in the current public service agreement. Fórsa represents physiotherapists.

These comments have significant meaning as under legislation groups deemed to be outside the public service agreement can face serious financial consequences such as forfeiture of increments.

A strike by nurses would be the Government’s biggest industrial relations test since gardaí went to the brink of an unprecedented dispute two years ago and won a special €50 million deal.

Ministers have insisted the existing public service agreement, which runs until the end of 2020, is the only avenue for State employees to secure increases.

The Government knows that how it deals with nurses will be watched very closely by others in the public service such as primary and secondary teachers who have also rejected Government pay proposals but not yet balloted for strike action.