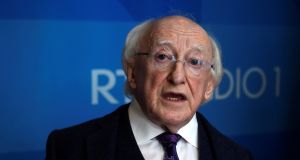 Police in Northern Ireland have disputed President Michael D Higgins’s claim that he had to travel to Belfast by private jet because they could not provide security for him to do so by road.

Mr Higgins had said his staff were advised “that for security reasons I couldn’t be picked up at the Border” during last May’s trip.

He is running for a second term as president and the election will be held on Friday.

The Police Service of Northern Ireland (PSNI) told the BBC: “It is the long-established policy of the PSNI not to comment on the security arrangements made for individuals.”

Assistant chief constable Alan Todd added: “The PSNI routinely work with visiting heads of state and other key figures visiting Northern Ireland and make full provisions for their safety in line with their requirements.”

Two Sunday newspaper polls asking voters about their intentions for the election show Mr Higgins (with near 70 per cent backing) with a lead of more than 55 points over Séan Gallagher.

Businessman Peter Casey, who was criticised this week for controversial comments he made about Travellers, told the Sunday Independent he would not be pulling out of the campaign. Polls in the Sunday Business Post and Sunday Times put support for him at 2 per cent.

Mr Higgins made his claim about his travel arrangements during a televised presidential debate on Wednesday evening.

In May, he spoke at Queen’s University Belfast on the 20th anniversary of the Belfast Agreement around the concepts of remembering, forgiving, forgetting, and imagining.

On Saturday night, a spokesman for the President said: “The President has made many visits to Northern Ireland by car and is grateful for the support received from the security services.

“For logistical reasons and on security advice, the President did use the government plane to travel to Belfast in May, to deliver the Harri Holkeri lecture.

“It would not be appropriate to further comment on the detail of security arrangements.”

“It is clear now that Michael D’s claim has caused considerable anger within the PSNI,”she tweeted. –Additional reporting: PA