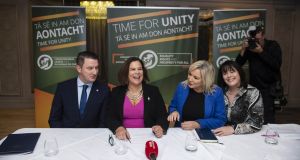 John Finucane, Sinn Féin’s candidate in the tightly contested constituency of North Belfast, has stated he is aiming to join seven “proudly abstentionist” colleagues when the votes are counted after the December 12th Westminster general election.

Mr Finucane spoke of his ambition to unseat the DUP’s Nigel Dodds in North Belfast when he attended the launch of Sinn Féin’s Westminster general election campaign on Monday.

Mr Finucane was joined for the launch by party leaders Mary Lou McDonald and Michelle O’Neill and its Westminster election candidates at the Lansdowne Hotel on the Antrim Road in the North Belfast constituency.

The DUP leader Arlene Foster who also was in Belfast for the nomination of several party candidates said Sinn Féin was campaigning on a “mandate to do nothing”.

Mr Finucane said that two years ago Sinn Féin returned “seven republican and proudly abstentionist MPs” and now he was aiming to join that group by defeating the outgoing DUP MP Nigel Dodds.

“Sinn Féin has been at the political frontline of Brexit. In the years ahead I am confident that I will join our seven Westminster team as another proudly progressive, pro-Remain voice for North Belfast,” he said.

“The Sinn Féin campaign to oust the DUP’s Nigel Dodds here in North Belfast is a touchstone on the issues that define this election,” he said.

“For many this election is about Remain against Leave. It’s about demanding progressive values and building a public discourse based on civil and human rights for all,” he said.

Sinn Féin is fielding candidates in most of the North’s 18 constituencies. It has stood aside in South Belfast to assist the SDLP’s Claire Hanna while the SDLP is not running in North Belfast, which will help Mr Finucane’s campaign. Sinn Féin also is not running in North Down and East Belfast and has yet to decide whether it will stand in the predominantly unionist constituencies of Strangford and Lagan Valley.

Mr Finucane in reference to Mr Dodds said the election in North Belfast was an opportunity to send a message that “a DUP leader who helped orchestrate years of Brexit chaos is about to be shown the door by the people of North Belfast”.

Sinn Féin leader Ms McDonald said this was “one of the most important elections that we have ever fought because we live in history-making and defining times”.

“The catastrophe of Brexit which is being forced upon us by the disastrous DUP-Tory alliance is against all of our interests,” she added.

Michelle Gildernew, the outgoing MP for Fermanagh South Tyrone who faces a strong challenge from the Ulster Unionist Party said that Westminster “serves only English interests” and that Sinn Féin “works where it matters, with the Dublin Government and the EU across the table from the lunacy of the Brexiteers and their dysfunctional parliament”.

“Irish interests never have and never will be served in a British parliament,” she said.

DUP leader Ms Foster said “whilst DUP candidates can stand on their record of delivery for hospitals, schools, broadband and roads, Sinn Féin candidates will be on the doorsteps empty-handed having delivered nothing but chaos and no plan to use Northern Ireland’s influence in parliament”.