Property tax: Lower value homes could face some of the largest increases 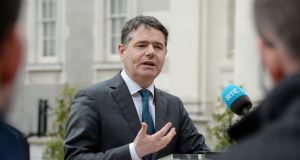 Paschal Donohoe, Minister for Finance, speaks to media on the report of the review of the Local Property Tax at the Department of the Taoiseach. Photograph: Alan Betson / The Irish Times

Owners of lower value homes could face some of the largest increases in property tax under a method emerging as the likeliest way of reforming the levy.

Increases would also be focused on Dublin, with 94 per cent of homes outside the capital avoiding any increase in the tax.

Minister for Finance Paschal Donohoe said his preferred way of reforming the tax was by broadening valuation bands and cutting the rate at which it was levied, although he has not decided on any specifics.

At present, property tax is levied at a rate of 0.18 per cent of the value of a home, with 0.25 per cent charged on properties valued at €1 million or more.

Property values are sorted into bands, with each band rising by €50,000 from €100,000 to €1 million. The valuation rates have remained the same since the tax was introduced during the crisis in 2013, with a change expected in 2016 postponed until this year. The Government has now deferred any changes for another 12 months.

A Department of Finance report has outlined a number of options to reform the tax to deal with the subsequent rise in property prices.

One would see the bands widened by 80 per cent and the rate cut to 0.1 per cent. Mr Donohoe said this option was closest to his own view, although he stressed he was not committing himself to any specific changes in rates or bands.

Every other band comes with a €90 tax rise and 41 per cent of homes in Dublin would jump one band. A jump in two bands or more – a hike of at least €180 – would affect 1.2 per cent of home owners in Dublin, and none outside the capital.

Mr Donohoe’s officials said he may undertake further work to see if the larger increase on lower value properties could be avoided.

The reports said the deferral of changes would damage the long-term sustainability of the tax, but Mr Donohoe said the Government was only putting off making a change for a year.

While the department said councils should be allowed only to raise the tax, Mr Donohoe wants them to keep to their current power to both cut and increase it.

The report says councils should keep 100 per cent of the tax raised in their areas, a move away from the current system where 20 per cent is put into a national pot. Mr Donohoe warned this could place a strain of €121 million on the public purse, if central government had to make up the shortfall in funding in some counties.

Exemptions for first-time buyers of homes in 2013, as well as homes newly built since 2013, should be abolished but will remain in place for homes significantly damaged by pyrite.

The report will be sent to Budgetary Oversight Committee but Government sources said there was little hope of an all-party approach to the issue, and conceded the policy would likely be a matter for party manifestos at the next election.