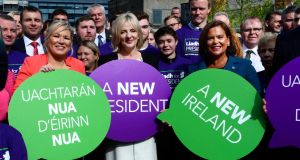 Liadh Ní Riada, confirmed today as Sinn Féin’s candidate for the presidency, joined the party in 2011, just three years before winning a seat in the European Parliament in the sprawling Ireland South constituency.

She was one of four Sinn Féin MEPs elected across the island of Ireland in 2014, and her nomination to stand against Michael D Higgins marks another step in her rapid ascent.

Since Mary Lou McDonald made it clear she was determined to stand a candidate against Mr Higgins, Ms Ní Riada’s name has been widely mentioned.

Ms McDonald has said she wants the presidential contest to provide a “broad base for a conversation Irish people can get involved in” on subjects such as LGBT issues and women’s rights.

Ms Ní Riada (51), is a further example of how Ms McDonald wants to change the party’s image. With Ms McDonald as leader and Michelle O’Neill heading Sinn Féin in Northern Ireland, Ms Ní Riada’s candidacy shows a party keen to emphasise that it is led by women and eager to debate issues of concern to modern Ireland.

Ms Ní Riada, who joined Sinn Féin as an Irish language officer in 2011, has a background in television production, including in RTÉ. She also ran her own production company, Red Shoe Productions, and was a member of the board that established TG4.

Ms Ní Riada is the daughter of Irish composer Seán Ó Riada, who died when she was four. Her mother died when she was just 10, and Ms Ní Riada was raised by her siblings. She has said her family were very poor and “didn’t have money”. She now lives in Ballyvourney in the Muskerry Gaeltacht in Cork with her husband and three children.

She has said in the past that she was inspired to move into politics by her first husband Fiachra Ó hAodha, who died just 10 months after their wedding, when Ní Riada was 29.

“He died suddenly two months before our first wedding anniversary from a brain haemorrhage as a result of malignant melanoma,” she said in 2013. “That was much more traumatic than the death of my parents really.”

In line with all public comments by Sinn Féin figures, Ms Ní Riada has said she fully believes Gerry Adams was not a member of the IRA.

She has also said she is “uncomfortable with the use of the word terrorism”.

“I don’t think you can have a blanket word like ‘terrorist’ to describe every conflict situation in the world because you’re almost automatically then putting, say, the IRA, for instance, as the one who created this terror, created this conflict.”

The Sinn Féin MEP told Hot Press last year that she disagreed with describing IRA atrocities as terrorist attacks. “It was a terrible time of conflict. But there is no conflict without a reason.”

In recent weeks, she denied she is against vaccination programmes after quotes she gave to local radio on the issue in 2016 resurfaced. She also posted her concerns on Facebook two years ago.

At the time, she spoke of her concerns upon receiving a consent form from her daughter’s school to sign for the HPV vaccine to be administered. She said she signed the form but then sent in a letter asking that her daughter not receive the vaccine.

“You see, the HSE, it is in a bit of shambles,” she said. “You kind of question how much can you trust that this is 100 per cent safe. I don’t think you probably say that about anything.”

In the statement released last month, she said “it is utter nonsense to claim that I am in any way opposed to vaccinations”.

“During a radio interview in 2016 I clearly outlined that my issue was a lack of information coming from the HSE.

“So there is no confusion, let me be absolutely clear. Vaccines are a crucial part of modern life and it is only because of them that we now enjoy the greatest life expectancy in human history. I would, of course, encourage all parents to get their children fully vaccinated.”

At the last presidential election in 2011, Sinn Féin stood Martin McGuinness, since deceased and then deputy first minister of Northern Ireland. His campaign was dogged by ongoing questions about his IRA past, and he eventually polled 13.7 per cent and 243,000 first preference votes.

Although Ms Ní Riada’s name recognition is nowhere near that of McGuinness, Sinn Féin hopes her candidacy will underline the change Ms McDonald has brought to the party.

Initial talk of a Sinn Féin candidate securing near 30 per cent of the vote on October 26th seems, at this stage, fanciful, however.

Not only is Ms Ní Riada running against a popular incumbent, but Sean Gallagher, who hails from Ballyhaise, Co Cavan, could also attract a strong vote along the Border region, where Sinn Féin would hope to pick up support.

Perhaps more than anything, Sinn Féin wants to use the presidential election as a platform to talk about Irish unity.

In her speech accepting the party nomination, Ms Ní Riada laid heavy emphasis on the issue and said she would lead a “citizens’ conversation” on it if she is elected.

With the future of Northern Ireland central to a Brexit process expected to intensify as polling day in the presidential election approaches, Ms Ní Ríada’s candidacy will place a Sinn Féin voice on unity at the forefront of public debate.