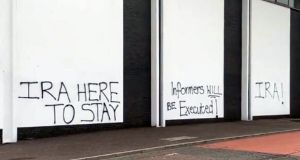 New pro-IRA grafitti has appeared just metres away from where the journalist Lyra McKee was killed in Creggan. Photograph: Aoife Moore/PA Wire

Dissident republican graffiti threatening anyone who gives information to the police has appeared near the scene of the fatal shooting of journalist Lyra McKee in Derry two weeks ago.

The 29-year-old journalist was shot during rioting in the Creggan area of the city and died shortly afterwards.

The Police Service of Northern Ireland (PSNI) believes the dissident republican group the New IRA was responsible. Three people have been arrested but were released without charge.

The graffiti, on the walls of a community centre in Central Drive, read: “IRA here to stay” and “Informers WILL be executed”.

Across the road, a large mural which had been altered following Ms McKee’s murder to read “IRA: Defeated Army” had been amended to read “New IRA aren’t done. Undefeated Army” and “IRA Unfinished Revolution”.

Two placards shaped like road signs had also been attached to lampposts.

One read: “RUC Informers: They will forget about you, we won’t. IRA.”

The other carried a picture of a rat with a target over it, and the words: “Informers will be shot. IRA.”

PSNI Superintendent Alan Hutton said he was aware of the graffiti and the signs which had been erected on lampposts and appealed anyone with information to contact police.

The parish priest in Creggan, Father Joe Gormley - who gave Ms McKee the last rites - said those responsible were trying to create an atmosphere of fear.

“These people are trying to impose their will down the barrel of a gun,” he told BBC Radio Foyle.

Fr Gormley said he would encourage anybody who had witnessed anything in connection with Ms McKee’s murder to give that information to the police.

The police in Derry have made repeated appeals for witnesses to come forward and have said more than 140 people have come forward with images, footage and other details.

In a fresh appeal on social media, the PSNI said they understood that “for some, fear and intimidation feel very real”, and witnesses would be given anonymity.

“After liaison with the Public Prosecution Service (PPS),” the PSNI said, “we can confirm that, for the purpose of this investigation, anonymity will be provided to witnesses of the murder and the activities of the gunman.

“Witnesses will be referred to as Witness A, B, C etc and your identity will be revealed only to the Public Prosecution Service.”

If witnesses were required to give evidence in court, the police statement said, the PSNI would “request the maximum protection” from the court. This could include “anonymity, evidence by video link, from behind screens and with voice distortion”.

Kevin Campbell, Sinn Féin councillor and a Creggan resident, said he did not believe the latest graffiti would deter people from coming forward.

“People see these gangs for what they are — they aren’t republicans, they are filth, and people recognise that,” he said.