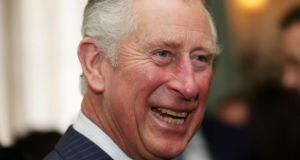 Britain’s Prince Charles is to visit Sligo in May, almost 20 years after the first trip to Ireland by the heir to the British throne.

Minister for Foreign Affairs Charlie Flanagan has welcomed the decision by Prince Charles and his second wife Camilla Parker Bowles to visit Ireland and Northern Ireland next month.

Sinn Féin leader Gerry Adams has said he hopes the visit will be “an occasion to promote reconciliation, respect and understanding”.

The visit from May 19th to 22nd is expected to include Sligo on the itinerary, and the schedule will involve both official and private engagements, according to the Department of Foreign Affairs.

Clarence House, the prince’s official residence,said that planning was “still in progress” and more details would be announced at a later stage.

The Department of Foreign Affairs said that it was “working with the British Embassy in Dublin on the arrangements”.

However, it is understood that the short programme may involve Mullaghmore, where Prince Charles’s great-uncle, Lord Louis Mountbatten, spent summer holidays – and where he died of injuries sustained in an IRA bombing of his boat on August 27th, 1979.

Prince Charles has spoken in the past of the impact that his great-uncle’s death had on him. Lord Mountbatten (79), who took holidays each summer at Classiebawn Castle near Mullaghmore harbour, had embarked on a lobster-potting and angling expedition on August 27th, 1979, when a bomb on board detonated just a few hundred yards from the harbour.

Mountbatten died of his injuries, as did his grandson Nicholas Knatchbull (14), Paul Maxwell (15) from Co Fermanagh, and Lady Brabourne (83), his eldest daughter’s mother-in-law. Nicholas Knatchbull’s parents and twin brother, Timothy, survived, but with serious injuries.

Thomas McMahon of Carrickmacross, Co Monaghan, was convicted of the bombing, which the IRA claimed responsibility for, and was sentenced to life imprisonment. He was released in 1998 under the terms of the Belfast Agreement.

Prince Charles undertook the first official visit to the State by a member of the British royal family since independence when he travelled to Dublin on May 31st, 1995. His arrival at Casement aerodrome in Baldonnel, west Dublin, was marked by a protest organised by Sinn Féin in Dublin city centre.

His second official visit here, in 2002, had scheduled a trip to the Burren, Co Clare, but this part of the itinerary was cancelled due to the death of his aunt, Princess Margaret.

Commenting on the plan, which is expected to include engagements in Dublin, Mr Flanagan said that “following the reciprocal State visits of recent years, this visit to Ireland” represents “a further expression of the warmth and friendly relations which now exist between us”.

“We look forward to their arrival next month, and to a visit programme which reflects the quality of these relations,” Mr Flanagan said.

Mr Adams said: “the visit by the British Queen to the Garden of Remembrance [in Dublin, in 2011], her words of reconciliation and the subsequent meetings with Martin McGuinness demonstrated the potential of these events.”

“I am conscious that Prince Charles is the symbolic head of the British army’s Parachute Regiment and the grievous wrong they have done, including to the people of Derry and Ballymurphy where I grew up,”he said.

“However I am also conscious that the British royal family have also been directly affected by the actions of republicans,” he added.

“I hope this visit will be an occasion to promote reconciliation, respect and understanding,” Mr Adams said.

Prince Charles and his wife, who is Duchess of Cornwall, visited Northern Ireland in June 2013, and April, 2014.