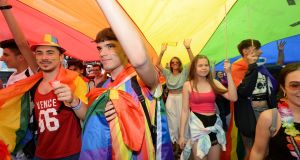 Dublin’s street traders were busy flogging rainbow-coloured merchandise in honour of the festivities on Saturday, as tens of thousands of spectators descended on the city centre for the annual Dublin Pride Parade.

One stall on O’Connell Bridge was selling flags, wigs, flower crowns and hats to punters ahead of the parade. There was also a selection of bootleg Eagles concert T-shirts and tops commemorating Liverpool’s recent Champions League victory for sale – but those remained untouched.

Today was all about Pride, you see, with toddlers and postboxes alike decked out in rainbow colours for the day that was in it. Indeed, O’Connell Street was a sea of colour as the parade returned to the thoroughfare for the first time in six years.

Proceedings kicked off at 1pm, with Riverdance warming the crowd up with a surprise performance. From there the parade itself got under way, with activist and artist Will St Leger serving as this year’s grand marshal.

The theme of this year’s event was Rainbow Revolution, a nod to the 50th anniversary of the Stonewall Riots, events 50 years ago which marked a high point in the gay liberation movement in the US. As such, the parade featured a number of groups calling for direct action on a number of social justice issues.

A number of advocacy groups and organisations, including Act Up Dublin, called for action on the ongoing HIV crisis. Marchers carried balloons emblazoned with the acronym “U=U,” which stands for “undetectable = untransmittable”. Amach! LGBT Galway carried a poignant banner commemorating Sylva Tukula, a transgender woman who died last year in an all-male direct provision centre. Another group, Say No To Direct Provision Ireland, called for the system to be abolished and dismantled.

On a slightly cheerier note, Taiwan Ireland Association were on hand to celebrate the recent passage of marriage equality in Taiwan.

The politician who appeared to be having the most fun was the Green Party’s Eamon Ryan, who danced barefoot down Eden Quay as music blared from a nearby boombox.

The Irish Kink Collective received a rapturous response for their first outing, with Pups & Handlers of Ireland also delighting many. “Look, a doggie!” an onlooker shouted at the sight of a man sporting puppy gear, including a mask and leash.

The most glamorous group featuring in the parade, though? That would have to the Property Registration Authority. Nothing gets you in the mood for a parade like an organisation committed to safeguarding property rights.

In recent years, there has been some unease about corporate involvement at Pride. Indeed, software company Intercom made a point of stepping back from this year’s parade and pledged to donate €10,000 to BeLonG To Youth Services instead of marching.

This year, corporations were as visible as ever, with extravagant floats from brands such as Google, Amazon, Tesco, LinkedIn, Indeed and Groupon, to name but a few. Deliveroo temporarily rebranded to Deloveroo and erected a giant KissCam in the city centre, while this writer was handed a T-shirt and a fistful of rainbow-coloured wristbands from global communications company Viasat. The slogan on the T-shirt? “Love. Connect Without Limits.”

These corporate gestures were amusingly pilloried by a group marching under the banner Idle Phrase and a Rainbow. The group carried signs mocking giant corporations and their empty gestures. “A phrase using no LGBTQ terms” read one. “A phrase about tolerance” read another.

As the parade crawled to Merrion Square, the party kicked up a notch. On Westland Row, a crowd behind the Aer Lingus float sang YMCA, while nearby residents waved flags from their windows and doorsteps. Later, a female guard on duty could be spotted walking briskly down the road while furiously mouthing the lyrics to I Will Survive by Gloria Gaynor as it played on a nearby float.

The parade concluded in Merrion Square with a number of speeches from activists, drag queens and politicians. Transgender activist Noah Halpin called for improved access to healthcare for transgender people, while Mary Lou McDonald called for the legalisation of same-sex marriage in Northern Ireland.

“Marriage equality must be a reality right across Ireland, and so the North must be next,” she said to cheers from the crowd. “As a political activist and as a leader, I want to tell you here today that we will do everything in our power to make sure that the North is next.”

As the numbers in Merrion Square swelled, drag queen Bunny O’Hare issued a word of warning to nearby residents. “We’re going to disturb you all night,” she joked.

There were a lot of special moments during the day. One of the most touching interludes came when Cork duo Sparkle took to the stage in Merrion Square. The group took a moment to remember the late journalist Lyra McKee, who was murdered in April and was a member of the LGBTQ+ community. “This one’s especially for Lyra,” they said. With that, they sang Dreams by The Cranberries, and the sun began to break through the clouds.