Dog attacked and killed by swan in Dublin’s Bushy Park 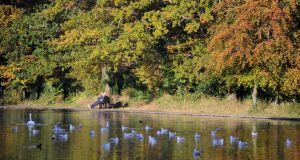 A file photograph of Bushy Park in Terenure, Dublin.

A dog was attacked and killed by a swan in a Dublin park on Saturday.

The cocker spaniel was swimming in the duck pond at Bushy Park in Terenure near a group of swans and cygnets when an adult swan broke away and made a beeline for her.

A man who was feeding the ducks at the far end of the pond, said he heard the dog’s owner shouting in attempt to get her attention.

“We started screaming at the swan, trying to distract it,” said the man. “The poor dog didn’t realise what was going on and swam straight for the swan.”

He said the swan lifted up its wings and beat down on the dog “with one wing and then the other”.

“That stunned the poor thing. Three or four more slaps and she was gone.”

The man said the attack was extremely upsetting to witness and took no more than a few seconds. The owner was so distressed, his phone fell into the pond, he added.

“They need to put up signs telling people to keep their dogs on leads around the pond. The swan was just protecting its cygnets.”

The incident occurred shortly before 11 am, at a time when dogs are allowed to roam off-lead in the park, which was busy at the time.

Peter Duignan, a Dublin City Council park ranger, arrived just after 11 am and he and two colleagues retrieved the dog’s body from the water using a small paddle boat and a net.

“I have never heard of anything like this happening before,” said Mr Duignan, who added that the dog’s owner was extremely distraught.