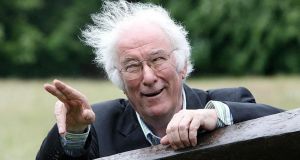 Late poet Seamus Heaney, above, has been described by Minister for Arts Jimmy Deenihan as a “very humble, modest man” who was “very accessible”.

President Michael D Higgins has led tributes to his friend and fellow poet Seamus Heaney who died this morning.

The pair have been friends for decades and Mr Higgins and his wife Sabina attended the Nobel Prize winning ceremony in Oslo in 1995.

Mr Higgins said the greeted the news this morning with the “greatest sadness”.

He praised Heaney’s “extraordinary depth and warmth of personality” and his “grace and generosity”.

In a statement Mr Higgins said: “As tributes flow in from around the world, as people recall the extraordinary occasions of the readings and the lectures, we in Ireland will once again get a sense of the depth and range of the contribution of Seamus Heaney to our contemporary world.

“The presence of Seamus was a warm one, full of humour, care and courtesy - a courtesy that enabled him to carry with such wry Northern Irish dignity so many well-deserved honours from all over the world.

“His careful delving, translation and attention to the work of other poets in different languages and often in conditions of unfreedom, meant that he provided them with an audience of a global kind. And we in Ireland gained from his scholarship and the breath of his reference.

“Generations of Irish people will have been familiar with Seamus’s poems. Scholars all over the world will have gained from the depth of the critical essays, and so many rights organisations will want to thank him for all the solidarity he gave to the struggles within the republic of conscience.

Taoiseach Enda Kenny said Heaney’s death has brought “great sorrow to Ireland” and only the poet himself could describe the depth of his loss to the nation.

Mr Kenny added: “For us, Seamus Heaney was the keeper of language, our codes, our essence as a people.”

He described him as an “exceptional ambassador for Ireland” and his work “reflected his deep love and knowledge of the Irish land and the Irish people. His poetry explained us to ourselves. In his work, the dignity and honour of the everyday lives of people came to life. “His legacy will live on as one of the finest Irish poets to have ever lived.

US vice president Joe Biden described Heaney as “one of the finest Irish poets to ever live” and said he was deeply saddened to learn of his death. “Heaney taught us that ‘once in a lifetime, the longed-for tidal wave of justice can rise up, and hope and history rhyme’. We have been lucky, in our lifetimes, to see that tidal wave of justice rise, and to find our hopes reflected in historic moments of opportunity.

“But most of all, we were lucky to have a poet with the grace of Seamus Heaney, whose simple, honest wisdom could help us better understand ourselves and the world we inhabit. I am sorry that we lost him, but grateful that his words will live on.”

Former US president Bill Clinton praised Seamus Heaney as “our finest poet of the rhythms of ordinary lives” and a “powerful voice for peace” in a tribute tonight.

Mr Clinton and his wife Hillary said they were saddened to learn of the death of their “friend”.

“Both his stunning work and his life were a gift to the world. His mind, heart, and his uniquely Irish gift for language made him our finest poet of the rhythms of ordinary lives and a powerful voice for peace. And he was a good and true friend,” the Clintons said.

“We loved him and we will miss him. More than a brilliant artist, Seamus was, from the first day we met him, a joy to be with and a warm and caring friend — in short, a true son of Northern Ireland.

“His wonderful work, like that of his fellow Irish Nobel Prize winners Shaw, Yeats, and Beckett, will be a lasting gift for all the world.”

Amnesty International Ireland’s chief executive Colm O’Gorman has described the poet as a “warm, generous and compassionate man who will be deeply missed by all who knew him, and by everyone who was ever touched by his work.

Colm O’Gorman said Heaney’s poem From the Republic of Conscience, which he wrote for Amnesty International, had inspired a generation of human rights activists and “will continue to inspire countless generations to come”.

He was “a true ambassador of conscience, a man whose empathy for the powerless and the marginalised was matched by his magnificent capacity to construct language which demanded a deep reflection on what it means to be human”.

Minister for Arts Jimmy Deenihan said he was , “ one of the most important writers of our age. His loss will be keenly felt, in Ireland and across the world.”

“His personal warmth, his wit, his humility, and his generosity with his time and his talent are well known. He was a mentor to many. His work had a deep sense of place and of our rich heritage,” he said.

University of Limerick President Don Barry said “Now words” could convey the mark he left “ on our country and our collective consciousness.”. Heany received an honorary doctorate from UL in 1996.

Trinity College provost Dr Patrick Prendergast said: “Seamus Heaney was a literary and cultural ambassador for Ireland, defining our artistic sensibility through the depth and scope of his poetry. “

“He will take his place among other great Irish writers of his generation and before, and inspire the minds of those who want to capture with words the ordinary in extraordinary ways,”. Heaney was an honorary fellow at TCD since 1998.

He added: “Seamus Heaney was a giant of modern literature who achieved the highest accolades and honours across the globe. And yet, what struck anyone who had the privilege of meeting him was the extent to which he never lost his connection to, and love for, the people and places of his native County Derry.

He described him as a “unifying figure” who made Irish people understand the changing dynamic on the island of Ireland.

John Hume, former SDLP leader in Northern Ireland and a native of Derry city, was good friends with Heaney.

“His poetry expressed a special love of people, place and diversity of life,” he said.

“That profound regard for humanity has made his poetry a special channel for repudiating violence, injustice and prejudice, and urging us all to the better side of our human nature.

“I have always received great inspiration from his written word and I am deeply grateful for the personal encouragement that I always received from such a warm friend and a wise man.”

Sinn Féin leader Gerry Adams expressed sadness at the death of Heaney. He extended his sympathy to Seamus’ wife Marie and family.

“It was with deep shock and sadness that I learned this morning of the death of poet, playwright and Nobel Laureate Seamus Heaney.

“I knew and was very fond of Seamus. He was a wonderful man as well as a literary figure of huge international stature, regarded by many as the greatest Irish poet since Yeats.”

Patsy McGlone, SDLP MP for Mid-Ulster, the area of Heaney’s birthplace, said he has left a tremendous cultural legacy to south Derry but also to the literary world.

“Seamus Heaney was the voice of this community, a man of the people who knew his community well and reflected the history and cultural richness of that community,” he said.

“I remember him calling in to my father’s business when I was younger and being struck by his humility.”

“His influence ran broader than the arts. We all remember how US president Bill Clinton chose Heaney’s great phrase about when ‘hope and history rhyme’ from Heaney’s play The Cure At Troy in his speech in Londonderry, and went on to use it for the title of his book detailing his vision of the US in the 21st Century,” he said.