Focus is on strengthening economic, tourism, cultural and historical ties between the countries 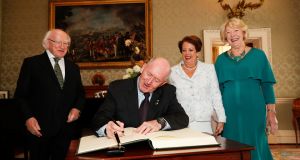 President Michael D Higgins leaves Áras an Uachtaráin in Dublin on Wednesday for the start of a 24-day visit to Australia and New Zealand marking the seventh and eighth State visits of his presidency.

Travelling on the invitation of the government of Australia, Mr Higgins will visit Perth, Melbourne, Hobart in Tasmania, Canberra, Sydney and Brisbane before flying on to New Zealand on October 24th.

It is the first State visit to Australia by an Irish president since Mary McAleese travelled there in 1998. The focus of the visit is on strengthening economic, tourism, cultural and historical ties between the countries.

The Government will be represented by Tánaiste and Minister for Business, Enterprise and Innovation Frances Fitzgerald who will be accompanied by executives from Enterprise Ireland and the IDA along with more than 50 Irish companies with the aim of promoting business connections between the two nations.

The President’s engagements include meetings with Australian prime minister Malcolm Turnbull and Sir Peter Cosgrove, the governor-general of the Commonwealth of Australia, on Monday, October 16th.

He will deliver 24 speeches on his travels, including an address to the joint Houses of Parliament of Western Australia next Tuesday, becoming the first head of state to speak to the parliament. His speech will focus on the historic connections between Ireland and Australia.

On Saturday, Mr Higgins will visit Fremantle Prison near Perth where 62 Irish prisoners were held for their part in the Fenian Rising of 1867. He will attend the Australasian GAA Championships on Sunday.

The State visit formally begins next Monday when he will be welcomed at Government House in Perth with a traditional Aboriginal ceremony and by the governor of Western Australia, Kerry Sanderson.

Later that day he will unveil a memorial to the Irish Famine in Subiaco Park in Perth before meeting the premier of Western Australia, Mark McGowan.

Mr Higgins will travel to Melbourne on Thursday, October 12th, when he will meet the premier of Victoria, Daniel Andrews, and address a group of Irish companies working with Enterprise Ireland.