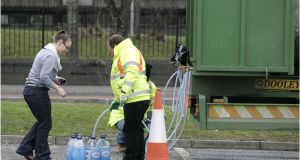 A householder collects water from a tanker due a boil-water notice. Photograph: Dara Mac Dónaill

Poor oversight of private water supplies may be putting the health of up to 750,000 people in the State at risk, the Environmental Protection Agency has said.

In its latest report on the quality of private supplies, the agency says water going into some hospitals and schools, hotels and creches from private supplies was inadequately monitored.

The EPA said 37 public group water schemes, 20 private group water schemes and 809 small private supplies were not being checked last year for E. coli, a common pollutant which frequently arises from sewage contamination that can cause severe sickness.

Of the 809 small private supplies not monitored for E.coli, 130 served hotels, B&Bs, and restaurants or cafes. An additional 73 small supplies served schools or childcare centres and 19 served nursing homes.

“Local authority monitoring and enforcement of private water supplies is not adequate. Many local authorities did not monitor all supplies in their area or carry out any audits of these supplies during the 2016 reporting period,” the EPA said.

The report Focus on Private Water Supplies 2016 showed that in areas where monitoring was carried out, boil-water notices were imposed on 126 private water supplies affecting more than 7,000 people.

With public group water schemes, the water is provided by Irish Water but responsibility for its distribution rests with the group scheme.

Private group water schemes are schemes where the owners of the scheme, usually representatives of the local community, source and distribute their own water. These can supply up to 5,000 people.

Small private supplies include industrial water supplies such as those used in the brewing industry, boreholes serving commercial premises such as pubs and hotels and public buildings such as schools and nursing homes as well as private housing estates where more then 50 people are supplied.

Gerard O’Leary, director of the EPA’s Office of Environmental Enforcement, said the “safety and security of these supplies must be improved or people are at risk of becoming ill”.

He said the number of supplies monitored last year was inadequate. Where monitoring was carried out it showed that private water supplies were at greater risk of being contaminated.

The report highlights that more than 60 of these supplies were found to be contaminated with human or animal waste at least once during the reporting year.

According to the report, only local authorities in Galway City, Dublin City and South Dublin had no such private water schemes.

Wicklow issued the largest number (43) of boil water notices as a result of monitoring, followed by Wexford at 33 and Cork at 18.

Darragh Page, programme manager of the EPA’s Office of Environmental Enforcement, said there was an increase in enforcement by local authorities but only nine carried out audits during the year.

One hundred Irish retailers for all your online Christmas shopping 19:03
Northern Ireland beginning to see reduction in rate of increase of Covid-19 18:55
Taoiseach promises supports for Cork businesses hit by flooding 18:53
Thirteen further deaths and 1,269 new cases of Covid-19 recorded in the Republic 18:47
Rescue operation under way to prevent freighter hitting rocks 17:41