Hotel rooms searched ahead of questioning in ticket touting investigation 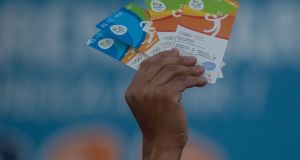 Police in Rio have seized the passports of three members of the Olympic Council of Ireland (OCI) after searching their hotel rooms in the Brazilian city on Sunday morning.

The three will be questioned in connection with the Olympic Games ticket-touting controversy that has already led to the detention of Patrick Hickey. Mr Hickey has temporarily stepped aside as an IOC executive board member, head of the European Olympic Committee and the OCI after his arrest.

The three men whose passports were siezed on Sunday, and who have not yet been named, will have to remain in Rio until Tuesday when they will be interviewed by police as part of the investigation.

Mobile phones, computers and tickets were taken by police during the early- morning search which was carried out under a warrant issued by the same court that ordered Mr Hickey’s arrest last Friday.

It emerged on Saturday that Mr Hickey is sharing a Rio de Janeiro prison cell with Kevin Mallon as both men wait to see if they are formally charged.

The two Irishmen are being held together at a remand unit of the Gericiná prison complex, known as Bangú 10, in the west of the city, Rio’s penitentiary administration confirmed on Saturday.

The Dublin finance director of British company THG, Mr Mallon was arrested in the city on August 5th in possession of 823 Olympic Council of Ireland (OCI) tickets.

Mr Hickey was taken to the jail in the early hours of Friday morning following his release on Thursday afternoon from the hospital where he had been under medical observation after feeling unwell during his arrest Wednesday morning.

Police claim both men were part of a scheme that saw OCI tickets passed to THG via the OCI’s official ticket vendor Pro10, in order to circumvent the rejection by Rio’s organisers of THG’s application to be the OCI’s vendor.

Both Mr Hickey, Pro10 and THG have denied any wrongdoing.

In a statement, the OCI said: “Early this morning in Rio, Brazilian police arrived at the OCI offices in the Olympic village and at OCI accommodation outside of the village.

“They were met by OCI personnel. No arrests were made. The police took possession of their passports along with their phones and laptops. The OCI personnel were asked to present for questioning at a local police station on Tuesday (23rd August) next. They agreed to do so.

“The OCI had an allocation of unused official tickets in their offices which had been made available for athletes’ families and friends. The police also took possession of these tickets.”