International Trade Union Confederation estimates 4,000 workers will die ‘before a ball is kicked’ 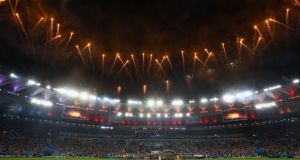 A general view of the stadium during fireworks in the 2014 FIFA World Cup Brazil Final match between Germany and Argentina Photograph: Getty Images

The World Cup may be just over but the focus is already turning to Qatar 2022. The plight of workers preparing for the World Cup in Qatar is set to feature this week at a festival in Cork.

This year’s festival, which starts on Tuesday will hear about conditions for workers in Qatar.

David Joyce, international development officer with the Irish Congress of Trade Unions, is involved in the international campaign to highlight the plight of migrant workers in Qatar.

“The working conditions of migrant workers in Qatar working on stadia and infrastructure for the 2022 World Cup are absolutely appalling- over 1,000 have died already,” he said.

“The International Trade Union Confederation estimate that 1,000 workers were injured in falls last year and according to one estimate, 4,000 workers will die before a ball is kicked.”

Mr Joyce said many of the problems stem from the kafala system in operation in Qatar where workers are tied to their employers who have responsibility for their visa and legal status.

“These migrant workers make up over 90 per cent of the labour force there working on the stadia, hotels, roads and rail networks for the 2022 World Cup,” he said.

“But they often are left unpaid, have to work long hours in dangerous conditions and live in fire traps with their employers often holding on to their passports so they can’t go home.”

Mr Joyce instanced the cases of Sri Lankan welders working 12 hours days in a vehicle repair shop in 50 degree heat and Bangladeshi workers sleeping 10 to a room in slum areas in Qatar.

“We also want freedom of association and collective bargaining for workers, the introduction of a grievance procedure and the use of international responsible recruitment agencies.”

Mr Joyce said that ICTU has already written to both the FAI and FIFA expressing its concern and it is urging FIFA to ensure that Qatar does start treating its migrant workers properly.

“Qatar must change and FIFA has the power to put conditions on the World Cup that can make a difference for workers who currently are effectively the property of their employers.”

Mr Joyce said much of the media focus on Qatar has been on reports the FIFA vote to award the World Cup to the Gulf State was rigged - with scant regard for the plight of workers.

“There’s been a huge kerfuffle recently about corruption - that’s raised the profile of what’s going on in Qatar but hundreds of workers dying on building sites there doesn’t seem to matter.”

Ger O’Mahony of the Spirit of Mother Jones Festival said that the festival committee were delighted to be able to offer Mr Joyce a chance to highlight the plight of workers in Qatar.

“Mother Jones fought all her life for workers’ rights and she would be appalled at the horrific conditions that these migrant workers are living and working in now in Qatar.

“We believe that her spirit lives on in the international fight for these men and women and we’re delighted to invite David to this year’s festival to help highlight their plight.”