Planned strike by teachers called off 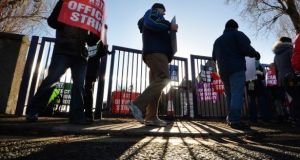 TUI president Gerry Quinn said on Friday that on foot of correspondence from the Minister the union was now satified that such an engagement was possible.

The planned strike by teachers, which could have closed up to 350 second level schools on Wednesday, February 24th, has been called off.

The Teachers’ Union of Ireland (TUI) said its executive committee had decided not to go ahead with the one-day strike in second level schools and the further/adult education sectors following contact with Minister for Education Jan O’Sullivan.

The TUI had previously stated that the strike would go ahead unless “meaningful” progress was made in talks with the Department of Education on issues such casualisation and income poverty for teachers.

TUI president Gerry Quinn said yesterday (FRI) that, on foot of correspondence from the Minister, the union was now satisfied that such an engagement was possible.

“As a sign of our good faith, the executive committee of the union decided not to hold our planned strike action in order to allow engagement in the hope of developing viable solutions to a range of crisis issues.”

He maintained the union had a a very strong mandate from members “to activate strike action at a later stage should it become apparent that sufficient progress is not being made”.

“Of key concern to TUI members are the precarious employment status and income poverty of new and recent entrants to the profession and the continuing, damaging effects of underfunding and understaffing on the service provided to students across all the sectors in which the union has members.”

Ms O’Sullivan said she welcomed the decision of the TUI executive to call off the strike. She said the decision was very welcome for parents and exam students in particular.

She reiterated that the Department of Education was open to engaging with TUI on matters of mutual concern in the context of continuing co-operation with collective agreements.

Earlier this month, the TUI staged a one-day strike in institute of technologies around the country.