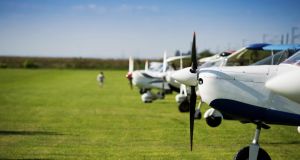 A man who died after his microlight aircraft crashed near Ballina, Co Mayo last month appeared to pass out in the cockpit seconds before impact, a preliminary air accident report has found. Image: iStock.

A man who died after his microlight aircraft crashed near Ballina, Co Mayo last month appeared to pass out in the cockpit seconds before impact, a preliminary air accident report has found.

Michael McCarrick was killed instantly when his microlight plane nosedived into a field at Breaffy near Ballina on May 4th.

The father-of-two had been on a pleasure spin in fine weather when the plane got into difficulties as he was heading towards the small airfield run by Lough Conn Flying Club at Cloghans, Ballina.

The preliminary report from Howard Hughes of the Air Accident Investigation Unit (AAIU) has determined that McCarrick had slumped forward and appeared to be unconscious in the moments before the plane crashed.

It said damage to the aircraft and the ground marks indicated that, at impact, the aircraft was moving in a near vertical, nose-down angle.

The initial examination of the wreckage revealed no mechanical failure that would have affected control of the plane while witness statements indicated that the aircraft was flying normally prior to the incident and that the engine sounded normal.

“The video showed the commencement of a left bank from straight and level flight,” the report says. “The pilot’s head was observed to slump forward and his eyes appeared to be closed in a manner that suggested incapacitation.”

It adds that the aircraft “continued rolling to the left and commenced a descent towards the ground, without any apparent corrective action by the pilot. The recording ended just prior to impact.”

The investigation is ongoing and will focus on factors including pilot incapacitation, licensing and medical details and an analysis of the recorded data and recovered wreckage.