Photographs of Ryan O’Neal and Stanley Kubrick made public 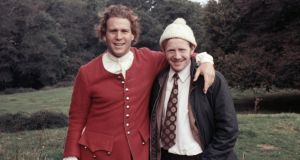 Actor Ryan O’Neill with Pat Heavin on the set of ‘Barry Lyndon’ in 1973. Photograph: Stanley Kubrick

There was no bigger film star during the early 1970s than Ryan O’Neal and no more controversial a director than Stanley Kubrick.

O’Neal had made Love Story in 1970, a small film that became a huge hit and made global superstars of him and Ali MacGraw. In 1973 O’Neal was the second highest grossing male star in the world after Clint Eastwood.

Kubrick made 2001: A Space Odyssey in 1968 and followed it up with his dystopian masterpiece A Clockwork Orange in 1971.

When he came to Ireland in 1973 to make Barry Lyndon it was a very big deal for a country without an established film infrastructure. Barry Lyndon is based on the William Makepeace Thackeray novel The Luck of Barry Lyndon about an 18th-century Irish adventurer making his way in London society.

The film was shot in Waterford in October 1973. The set was closed to the press, but local man Pat Heavin managed to get on to it as they were filming near his house.

Like many first-timers to a film set, he was quickly disabused of any notions of glamour by the sheer tedium of waiting around between takes. He witnessed the Irish actor Godfrey Quigley falling off a horse while Kubrick, ever the perfectionist, made him do retakes.

“The glamour of film-making evaporated after an hour or two, as I watched a stuntman take three or four heavy falls from a galloping horse. They were shooting the scene where Godfrey Quigley’s character was killed and it was not even in the final edit.”

Then he spotted the famously irascible Kubrick, who hated being photographed, taking a break. “I said ‘To hell with it. I’ll go for broke.’ I asked if I could take his picture and with a bit of encouragement from Ryan O’Neal, Stanley smiled and I had my picture.”

Kubrick is seen smiling in the photograph, something he rarely did and certainly not for the press. Heavin says he respected the circumstances in which he was allowed to take the photographs and has never released them publicly before now.

However, when he heard Ryan O’Neal and producer Jan Harlan were coming to Dublin for a 40th anniversary screening of Barry Lyndon, he decided to release them.

“It was a moment of trust and I never showed the picture to anyone except family. I want the photographs passed on to him [O’Neal] to thank him for his kindness on the day,” he says.

The Barry Lyndon budget ballooned from $2.5 million to $11 million. It was not released until 1975.

The official reason given was that he had completed filming, but the real reason is that he was in fear of the IRA having received a tip-off from the Garda that death threats had been made against him.

There is a gala screening of Barry Lyndon at the Savoy Cinema, Dublin, as part of the Jameson International Film Festival at 1.30pm today.