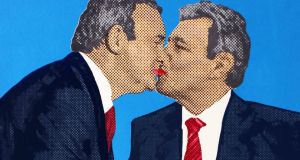 A spokeswoman for the council rejected a claim by artist Stuart Cannell that it was engaging in a “form of censorship” by placing a notice at the entrance to the exhibition at the Strule Arts Centre in Omagh, Co Tyrone.

The sign outside the Images of Ulster display reads: “This exhibition contains some artwork containing violent or sexual images.”

The council spokeswoman said the notice was an “information” rather than a “warning” sign and in relation to the “violent” reference related to a separate piece which contained an image of violence.

Mr Cannell told BBC Radio Foyle that he believed the sign was discriminatory against gay people, and that it would not have been put up if the couple in the image had been a man and a woman.

The council said the sign informs patrons that it is left to the viewer to make his/her own decision.