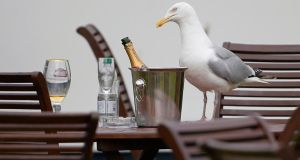 A seagull at the British Open in Scotland. Photograph: Paul Childs/Reuters

A Kerry-based marine expert has called for “a bit of factual perspective” on the debate over “killer gulls” and has warned that the birds face a real food crisis from next year.

Retired fisheries officer and Dingle Oceanworld aquarium founder Kevin Flannery said the new EU rules banning discards of fish at sea would have an impact on certain marine birds, and might push more of them inland.

Earlier this week, Fianna Fáil Senator Denis O’Donovan called for a cull of urban-based gulls, describing them as “vicious” and accusing them of “invading towns and villages”.

Speaking in the Seanad, he noted that British prime minister David Cameron had “come out publicly to record his concern”.

Mr Cameron called for a “big conversation” on the birds’ behaviour last week after reported attacks by gulls in Cornwall.

Mr Flannery, who received an honorary degree from University College Cork earlier this year, said there had been insufficient scientific research on the likely impact of the EU fish discard ban, which comes into force for all whitefish vessels from next January.

“But the European Commission in all its wisdom extended it to all fish, and this means that juvenile flatfish and other inedible species that can survive after being caught and discarded, will be brought ashore by law.

“Seabirds like gannets and guillemots which dive for food are already under pressure, and the scavengers like herring gulls who depend on fishing boats will be forced to move inland.”

Birdwatch Ireland development officer Niall Hatch said Mr Flannery had made a “very good point”, given that herring gulls did not have the fishing skills of terns, guillemots and other marine species.

“Gulls have learned to associate humans with food, due to our own habits with feeding birds and with litter, and there are a few rogues – particularly herring gulls,” he said.

“However, herring gulls have actually declined by 90 per cent in the past 10 years, decreasing from 60,000 pairs to about 6,000 due to botulism from rubbish dumps and loss of breeding areas to minkes, rats and to human activity.

“So it is a species in crisis that does not need a cull.”

Mr Hatch said there were more gulls – mainly lesser black-backed and herring – in cities in wintertime than in summer, but his organisation never received complaints in the winter.

Members of the public can submit reports via an online survey at birdwatchireland.ie.