Permission granted for new bridge across Shannon in Athlone 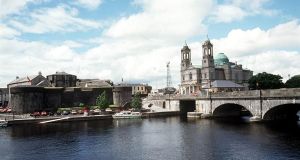 A view of Athlone Castle and the Shannon

A new bridge across the Shannon in Athlone is to be built after An Bord Pleanála granted planning permission.

The planning board on Tuesday gave approval for the construction of the 104-metre pedestrian and cycleway bridge across the river between the Radisson Blu Hotel and the Luan Gallery in the town.

The bridge will form part of the planned Dublin-Galway greenway and will take two years to construct.

Westmeath County Council, which sought the permission, welcomed the decision. Senior executive engineer Deirdre Reilly, project manager for the cycleway from Maynooth to Galway, said the bridge would link the marina to refurbished Athlone Castle.

“This is a significant milestone for the proposed Galway to Dublin national cycleway project. This will be a major tourist attraction providing a coast-to-coast greenway linking Galway to Dublin via Athlone,” Ms Reilly said.

Planning and construction on the greenway from Spencer Dock in Dublin to Athlone is either complete or under way except for 700 metres on the Mullingar-Athlone section.

Planning, consultation and construction on the proposed Roscommon-Galway section has been suspended since 2015.

An oral planning hearing in August about the bridge examined an environmental impact statement and the compulsory purchase order from the Radisson Blu Hotel, of a small footfall on the hotel’s side of the river.

It also considered two objections from owners of apartments attached to the hotel overlooking the proposed cycleway, concerned about issues including increased traffic and the risk of anti-social behaviour.

In a written submission, the Department of Heritage highlighted concerns about whether the standalone application for the bridge “constitutes project splitting” of the cycleway from Dublin to Galway.

The department also said that “no significant details of the project” or any mitigation measures “should be deferred” until after permission was granted as there could be gaps in the environmental assessments carried out in advance.

The structure comprises a two-span bridge with a pier in the middle of the river and end supports on the river banks. It is described as a slender, low-level, elliptical arch bridge.