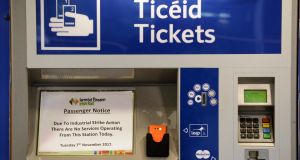 Tens of thousands of rail passengers are experiencing disruption today as staff at Irish Rail stage a second all-day strike. No Dart, commuter or intercity services are operating for 24 hours, with three more stoppages planned for the weeks ahead. Here’s how some commuters were affected by today’s action.

Erin Healy, Balbriggan, Co Dublin
I live in Balbriggan and was at the bus stop this morning at 6.30am in hope of getting on any bus. After being refused for not being a “regular” on the first bus, run by Bus Éireann, two more buses passed by that were completely full. When around 7.40am, I finally got on a bus, I got the last seat and other customers actually had to stand on the coach. I eventually made it in to work at 9.30am, half an hour late. I feel for the workers, but surely there is a way that they can get what they want without causing such a disruption to everyone else’s daily lives. I dread the thought of going home tonight.

Kieran O’Donovan, Kilglass, Co Roscommon
I usually drive from Roscommon to Dublin city centre for work. Today I stayed with family in Maynooth in Co Kildare to avoid as much of the additional traffic as I could. I was still two hours on the road from Maynooth to the city centre and I’m already preparing to be on the road for over two hours tonight. Neither party have attempted to sit down yet, or go to the Labour Court. I’m facing disruption for the foreseeable future. It’s extremely frustrating that they won’t even attempt to find a solution.

A Co Meath commuter
Because of the strikes I’ve been forced to use Bus Éireann to get to college, which is expensive, reliably late and due to the strikes, very busy. So busy, in fact, many people couldn’t board because the bus was full. I always find myself in favour of industrial action, but on this occasion Irish Rail does not have my support. In order to go on strike, you need to be doing your job in the first place which this company has not been doing. I can’t remember the last time I got a train that came on time. They may deserve a pay rise when they start doing their jobs properly, and not a moment before.

Have your say: Have you been affected by the Irish Rail strikes?

Eoin Lawlor, Celbridge, Co Kildare
I support the strike but it’s really showing how unfit for purpose the Dublin Bus routes are. I live in Celbridge, the largest town in north Kildare, yet our only Dublin Bus route, the 67, starts in Maynooth and there’s one bus every half hour, so it’s arriving in Celbridge full already. I got a lift into work this morning so it was fine but the evening commute will be hectic.

Paul Gordon, Dublin
The strike meant I had to get up earlier to catch a bus and wait 20 minutes in the cold before it drove past me, full. I soon got another and was in work about ten minutes later than usual. It’s a very minor inconvenience that I’m prepared to accept in the hope that Irish Rail workers action leads to improved pay and working conditions. Social solidarity has eroded in this country and we need to examine why people feel forced to strike and listen to their needs. I’m sure most on the picket lines would rather not be there but feel compelled to do so.

Sorcha Anderson, Co Meath
I normally get train from Enfield, Co Meath to Connolly Station, Dublin. This morning I had to get a bus at 6am from Trim, and arrived at Busáras in Dublin at 7.50am. The traffic was brutal in Phibsborough. It cost me €18.80 for a return ticket.

I do agree with the Irish Rail workers, 10 years is way too long without a pay rise. Anyone in the private sector would move jobs in a similar situation, but train drivers have no other options. It’s all politics, the Government have the money somewhere, they need to prioritise public transport more. Meath is very poorly served by public transport, but we definitely need the trains back running properly.

Sean O’Riordan, Dublin
This morning I was at the Dublin Bus stop on Manor Street in Stoneybatter, Dublin 7 and stood there for 50 minutes while I watched 15 buses pass by. Not one stopped. In the end I walked back home and had to call my boss to say I would be unable to get into work until about 10.30am. The fact that I am not a train user and can be so badly affected is a testament to how bad our overall public transport system is.

Isabel Hughes, Kilcoole, Wicklow
I usually get the 84X into town every morning for work, but this morning I left my house at 6.50am and didn’t get into the city centre until 8.50am. The bus was already full by the time it got to the Southern Cross, so lots of people couldn’t get on. The evenings are even worse - each 84X leaving the first stop at Hawkins Street is almost completely full. I do hope they can resolve the dispute soon, I feel for anyone going to the Ireland match next week!

Audrey Doran, Dublin
I usually get the Dart from Killester into Government Buildings on Merrion Street. It took over an hour to just get on a bus this morning! I’m dreading going home now.