Pay rises to Defence Forces to be considered by Cabinet 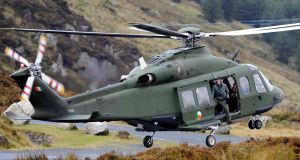 The Cabinet will today consider proposals for a €10.1 million package of pay increases for members of the Defence Forces.

Military service allowances, which currently range from €42 to €123 per week, would be raised by 10 per cent, as part of a move to improve recruitment and retention of personnel.

Pay cuts imposed in 2013 are also expected to be reversed as part of the package.

In addition, a loyalty bonus – which could be up to €19,000 – is expected to be put in place to encourage pilots to remain in the Defence Forces.

The proposals, which are to be presented to Cabinet by Minister for Public Expenditure Paschal Donohoe, are based on a report drawn up by the Public Service Pay Commission.

If approved by Government, the new increased allowances would come into effect immediately.

Informed sources said military organisations may be permitted to hold talks with the Irish Congress of Trade Unions regarding some form of partial affiliation with the trade union movement. However, sources said the Government would not grant Defence Forces members the right to go on strike.

Mr Donohoe is expected to tell the Cabinet that the cost of increasing the military service allowance by 10 per cent would be approximately €4.8 million in a full year.

Mr Donohoe and Minister of State at the Department of Defence Paul Keogh are likely to publish their proposals on Wednesday.

Numbers in the Defence Forces have continued to fall despite recent recruitment campaigns. The full strength of the Army, Naval Service and Air Corps combined should be a minimum of 9,500 personnel, but has now fallen below 8,500. This is the lowest point since numbers increased in the 1970s in response to the Troubles.

There have been concerns in Government over recent weeks that its planned package for the Defence Forces would not meet the expectations of those campaigning for improved pay and conditions.

Following the publication of its plans, the Government is likely to wait to see whether the military representative bodies decide to put the new proposals to a ballot of members.

Sources said last night the organisation representing enlisted personnel, Pdforra, would read the proposals and decide on whether to put the measures to a ballot.