Parents of Milly Tuomey say: ‘We didn’t know the signs’ 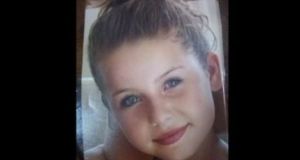 The parents of an 11-year-old girl from south Dublin who died by suicide last year have said they were not aware of the signs to look out for at the time of their daughter’s death.

Milly Tuomey took her own life on January 1st, 2016, weeks after posting a message on Instagram saying she was unhappy with her appearance and wanted to die, an inquest heard earlier this month.

Speaking on RTÉ The Late Late Show on Friday, Milly’s mother Fiona said she and her husband Tim had not known the warning signs to watch for.

“I think that the main reason we wanted to come on and talk to people was to really get across the message that you don’t know,” said Mrs Tuomey.

She said people think of depression as “a big glaring sign across somebody’s forehead . . . a dark cloud, somebody crying, somebody shaking”, but that isn’t always the case.

“There were highs and there were lows. (Milly) could be withdrawn, she was irritable - I mean, it was a mix. But again, we’re coming from a position that unless somebody already has a diagnosed mental illness, you don’t know.

“You are not in a position to know the cues. You hear some of the warning signs and, of course, with 20-20 hindsight, fantastic, we might have been more aware of them, but unfortunately, we didn’t know the signs.”

Mrs Tuomey said had they been aware of SafeTALK, a training programme that prepares participants to identify people with thoughts of suicide and connect them to suicide first aid resources, they would have been better prepared to help Milly.

Mrs Tuomey said at the time she and her husband “weren’t empowered to have the conversation that we know you should have” and had they known about SafeTALK, they “would have at least had an opportunity to have a very direct conversation naming ‘suicide’, naming ‘killing yourself’, naming all these very tough words which may have helped keep Millie safe.”

“Very, very difficult things to say, but we didn’t know that even existed.”

Mrs Tuomey said she thinks politicians should have the moral courage to allocate the same budget to suicide prevention as is given to road safety, saying “three times more people die by suicide than on the roads in Ireland, and 10 times more money is spent on road safety than on suicide.”

She called on people to sign a petition on 3ts.ie calling for the establishment of a suicide prevention authority, with a similar function to the Road Safety Authority (RSA) with regard to road safety.

“We know how successful (the RSA) been in reducing road deaths and what a marvellous job they’ve done and we would like the same to happen for people so that we aren’t losing people of every age to suicide, but particularly young people,” she said.

Milly’s GP recommended that she see a psychologist, but Milly was assigned to an art therapist, as the psychologist was no longer taking appointments.

Mrs Tuomey was later advised to make an appointment with the HSE’s Child and Adolescent Mental Health Services, which she did.

The appointment was made for January 30th and later brought forward. Milly was found in critical condition on January 1st and died in hospital on January 4th.

If you are affected by any of these issues, contact the Samaritans (116 123 or jo@samaritans.org)