Late property developer was man of integrity and his family have lost treasure, says priest 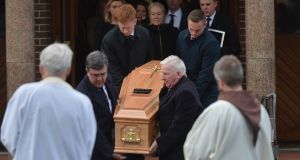 The remains are removed at the funeral of Owen O’Callaghan at St Patrick’s Church, Rochestown, Cork, on Tuesday. Photograph: Michael Mac Sweeney/Provision 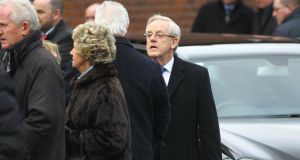 Property developer Owen O’Callaghan left a footprint across Ireland with the shopping centres he built, but his greatest legacy was the generosity he showed to his family, friends and others, his funeral Mass was told.

Fr Pat O’Mahony said that while newspapers had noted Mr O’Callaghan’s impact on Cork and elsewhere in Ireland, his legacy and his loss would be most felt by his wife Shelagh, their children Brian and Zelda and their extended family.

Quoting from A Psalm of Life by WH Longfellow, Fr O’Mahony said the poem captured well Mr O’Callaghan’s impact, as he reminded mourners that “Lives of great men all remind us/we can make our lives sublime/and departing leave behind us/footprints on the sands of time”.

Fr O’Mahony said Mr O’Callaghan, who died on Monday, was a well-known figure, but ultimately a very private man. This was never more evident than in the discreet way he helped charitable organisations, he said.

“He was a man of huge integrity, a man of his word and a family man, and while the papers were saying that we have lost a national treasure and Cork city has lost a champion, it is his family who have lost the treasure that he was,” Fr O’Mahony said.

Following the requiem Mass at St Patrick’s Church in Rochestown, where he was a regular massgoer, Mr O’Callaghan was buried in St Mary & St John Churchyard Cemetery in his native Ballincollig.

Former public relations practitioner and lobbyist Frank Dunlop, who told the Mahon tribunal that Mr O’Callaghan was unaware that he paid councillors in Dublin to back the rezoning of a planned shopping centre being developed by Mr O’Callaghan at Quarryvale, was also present.