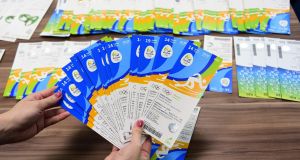 The British company at the centre of the Olympic ticketing controversy did not have the right to sell tickets for the event, either in Brazil or abroad, according to the Brazilian Olympic organisers.

In a letter dated October 29th, 2015, seen by The Irish Times, the Brazilian National Olympic Organising Committee stated that “the company THG Sports does not [‘does not’ is underlined in the original] possess the right to commercialise tickets related to the Games Rio 2016, especially those classified as ‘hospitality’, whether in Brazil or abroad”.

Last night, however, a THG spokeswoman said it was correct “to state that THG is not an authorised ticket reseller. However, the company is allowed to buy tickets from authorised resellers for hospitality.”

THG’s Dublin finance director, Kevin Mallon, was arrested last Friday in Rio de Janiero and has been charged with illegally selling tickets for the Games.

Mr Mallon was picked up in a hotel near the main Olympic venue in possession of hundreds of tickets for high-demand sporting events, as well as the opening and closing ceremonies.

Brazilian police claim he was selling them at above face value, a crime in Brazil punishable by up to two years in jail.

Police say they are awaiting the results of forensic tests to determine if all the tickets in Mr Mallon’s possession are genuine, and are seeking to discover how he acquired them.

Many of the tickets have been linked to the Olympic Council of Ireland (OCI), which says it has launched an inquiry into the matter.

No right to sell

The letter states that within Brazil the only authorised agent is Tam Viagens, part of the LATAM airline group, and its nominated agent, US company IMM. The letter warns that as THG Sports and any other company linked to its parent Marcus Evans Company are not authorised sellers, “the commercialisation of such tickets constitutes a contractual infraction and eventually, illegal, if they were commercialised above face value”.

The letter said tickets acquired from the company could be cancelled.

The local organising committee did not respond to questions about any action it took concerning THG Sports. The International Olympic Committee in Switzerland did not respond to questions about whether it was informed by the local organising committee of THG Sport’s activities in Brazil last year and, if so, what action it took.

The OCI said in a statement yesterday that it has recommended to the local organising committee and the IOC “that if any wrongdoing is discovered on the part of any ATR in this affair, then its status as an ATR be reviewed both for Rio 2016 and future Games”.

The statement concluded: “The OCI strictly adheres to the IOC regulations around ticket allocation, sale and re-sale. We are treating this matter with the utmost seriousness.”

In a statement, THG Sports said it “entirely refutes any suggestion that they or he [Mr Mallon] have acted in any way unlawfully”.

Mr Mallon’s legal representatives are understood to be petitioning for his immediate release from prison before a superior court in the capital, Brasília.

In its statement, THG Sports said: “Police action was taken in response to allegations made to the police by a private individual. There is no evidence to support these claims and certain allegations made have been shown to be false.

“Mr Mallon and THG Sports are cooperating fully with the Brazilian authorities.”

The company also said the “reported claim that James Sinton, former CEO of THG Sports, was arrested in relation to wrongdoing at the Brazil Fifa World Cup is false. He voluntarily made a statement to the police in relation to an investigation they were conducting around the World Cup in Brazil. No action was taken against him.”

THG Sports said it is “committed to the highest ethical and professional standards, operating in full compliance with local laws and regulations”, and is seeking “an urgent review” of Mr Mallon’s case.