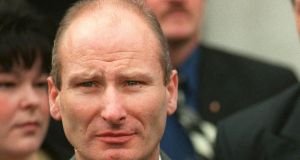 Billy Hutchinson: leader of the Progressive Unionist Party, which is linked to the UVF, said: “We will move on to the next part [of the graduated response]. It will be peaceful . . . as it was today, so I think we’re in a good position.”

PSNI chief constable George Hamilton has praised the Orange Order and unionist and nationalist politicians for helping ensure that Saturday’s 12th of July celebrations, particularly in north Belfast, passed off without any major incidents.

The chief constable had mounted a big security operation to cope with any outbreak of violence but in the end the day concluded peacefully.

Mr Hamilton, and politicians and community leaders generally, were most relieved that the contentious return parade of north Belfast Ligoniel lodges on Saturday evening was successfully marshalled by loyalist and Orange Order members.

Police had placed metal barriers close to the top of the Woodvale Road to ensure the Orangemen, in line with the disputed Parades Commission ruling, could not march on past the Ardoyne shops about 400m

Orange marshals, however, working with loyalists linked to the UVF and UDA created a “safe zone” of some 20m to prevent any troublemakers getting near the police lines.

The lodges arrived at the top of Woodvale Road shortly after 7.05pm. Senior Orangeman Spencer Beattie told several hundred colleagues and supporters that the more republicans “attack our heritage and traditions the stronger we will become”.

Before he spoke one of the bands briefly played the so-called sectarian Famine Song to the air of Sloop John B, with the line: The Famine is over why don’t you go home.

Orangemen and supporters returned to the west Belfast Orange hall on the loyalist Shankill shortly after 7.20pm and dispersed peacefully.

North Belfast DUP MP Nigel Dodds said Saturday was a “watershed to restore the lawful rights of the Orange brethren”.

He added that the combined unionist “graduated response” against the Parades Commission Ardoyne parade decision would continue. “The situation on this road has been created by the denial of shared space by republican threats of violence,” he said.

Billy Hutchinson, leader of the Progressive Unionist Party, which is linked to the UVF, said: “We will move on to the next part [of the graduated response]. It will be peaceful . . . as it was today, so I think we’re in a good position.”

The Orange Order also held up each of the 17 main parades for six minutes in protest against the Ardoyne ruling. It also held protests during return feeder parades in several parts of the North, but in “non-contentious areas”.

Northern Secretary Theresa Villiers said efforts must be made to build on the success of the day. “It is important that we build on this, by continuing to work for locally agreed solutions to contentious parades. This government will continue to do all we can to encourage a way forward,” she said.

North Belfast SDLP Assembly member Alban Maginness also welcomed the peaceful 12th: “It is vital that both communities now re-engage in . . . dialogue aimed at securing a lasting resolution that will see peace continue at this flashpoint.”

Sinn Féin complained of breaches of Parades Commission determinations elsewhere in Belfast and in Portadown, including an alleged assault of a photographer by a loyalist bandsman in Belfast.