On the beat: Gardaí show off dance moves after Swiss challenge

Gardaí across Ireland responded to a social media challenge from the Swiss police to dance the Jerusalema. Video: Garda Síochána 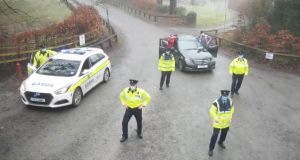 Members of An Garda Síochána have played their part in helping the community during the Covid-19 pandemic, but their attempts to bring joy to Irish people saw them take a different beat this week.

In a video shared on the offical Garda social media pages on Tuesday, members of the force are seen wearing their uniforms and dancing their hearts out in various locations around Ireland.

From the tops of buildings to the backs of horses, gardaí are seen dancing to the viral African hit Jerusalema, composed by musician Master KG and sung by African gospel vocalist Nomcebo Zikode.

The video, which was shared widely on social media, was in response to a challenge issued by Swiss police, who took part in the social media trend in early January.

Following the publication of the Swiss video, Frankie Shanley, an Irish radio DJ based in Portugal who is also known as Frankie Beats, asked the gardaí if they were up to the challenge.

“Police officers in Switzerland @fedpolCH decided to do something special for its people in these dark times. Just amazing! @gardainfo? Will you accept the challenge if enough people retweet this?” he asked on Twitter.

We have stepped up to the Swiss police @fedpolCH #JerusalemaChallenge. Gardaí across Ireland answered the call to give the public we serve a lift in these challenging times. #StayTogether #homeStaySafe pic.twitter.com/sbLdkk54hB

Encouraging their Irish counterparts to take part, the Swiss Federal Police’s official Twitter account said they were “looking forward to the performance” by gardaí.

But they raised the stakes further, adding that the Swiss “can hardly be topped in terms of precision, discipline an [sic] perfectionism”.

Once the Department of Justice caught wind of the international head-to-head, it came out swinging in support of the Irish police, with its offical Twitter page telling gardaí they had “got this” and called on them to “make Ireland proud”.

As a nation famous for our traditional dancing, who could blame the gardaí for finding the challenge too tempting to refuse?

“We are very happy to accept. We better get practicing on our Riverdance routines,” they replied on January 15th.

The finished product was shared on Monday, with members of the force seen imitating the routine while wearing the masks. Adding their own twist, it featured two members of the Garda mounted unit - the horseback division - and an Irish dancer.

“We have stepped up to the Swiss police #JerusalemaChallenge. Gardaí across Ireland answered the call to give the public we serve a lift in these challenging times. #StayTogether #homeStaySafe,” they said in a tweet.

At the end of the video, they added: “Thank you for watching. We hope it brought a smile in these dark times.”

In 2020, #JerusalemaDanceChallenge gained popularity across the world, with groups – from healthcare workers to airport staff – taking part in the challenge to provide hope amid the coronavirus pandemic.