Nurses’ strikes: Talks on staffing levels but not pay proposed by Ministers

INMO says proposal ‘most cynical move’; PNA says talks that did not address pay would be of ‘no benefit’ 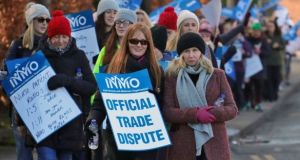 Nurses pictured on the picket line outside St Vincent’s Hospital in Dublin last Wednesday as part of a dispute over pay. Photograph: Collins

The Government has proposed there should be new talks with nursing unions on issues relating to staffing levels but not pay as a way of resolving the current dispute involving nurses and midwives.

In a joint statement on Monday, Minister for Health Simon Harris and the Minister for Public Expenditure Paschal Donohoe said they were disappointed that nearly 40,000 nurses and midwives were to stage further strikes on Tuesday and on Thursday this week.

The HSE said the about 50,000 people would have scheduled appointments in hospitals and community services cancelled as a result of the work stoppages.

The Ministers said that the Government was willing “to engage in talks on the range of workplace- related issues other than pay to try to resolve the dispute”.

“ This initiative could focus on the contribution and arrangements for the further roll out of the ‘Safe Staffing Framework’ to improve staff and patient outcomes and reduce reliance on agency staffing in our hospitals. In addition, this engagement would encompass other relevant organisational issues appropriate to supporting quality and efficiency in the provision of patient service delivery in an integrated way. “

Union sources said the “Safe Staffing Framework” was a piece of academic work carried out by University College Cork which suggested a staffing ratio of 80:20 between nurses and healthcare assistants.

The WRC has invited nursing unions and public service management to new talks in an attempt to avert further strikes by nurses and midwives scheduled for the days ahead.

However the general secretary of the Irish Nurses and Midwives Organisation (INMO) Phil Ni Sheaghdha said the Ministers’ proposal was “the most cynical move I have seen in a long time”.

She said the non-pay issues involving nursing had been addressed in an agreement brokered in 2017 but that health service management had not been able to fulfil the deal as it was unable to secure sufficient nurses to fill posts.

Ms Ni Sheaghdha described the Minister’s proposal as “spin” and said it was hugely disrespectful. She said there had been no correspondence to the INMO about the Government proposal before nurses had seen details in the media.

On Monday night , the INMO said it had still received no offer or proposal to reverse Tuesday’s strike.

“Recycling broken promises is no way to build good-faith negotiations. The government’s press release refers to non-pay issues which are already agreed since 2017,” Ms Ní Sheaghdhasaid.

She said nurses had identified excessive costs and wastage which could be used to address the pay issues.

Ms Ni Sheaghdha said the INMO had identified costs which would be cut if more nurses and midwives could be attracted to work in the public health sector such as over €100m spent in 2018 on agency nurses, used to fill gaps left by vacant posts;

“None of these savings are included in the government’s €300m cost estimate, the INMO said.

The Psychiatric Nurses Association said any talks that did not address pay would be of “no benefit” in resolving current nursing dispute.

The HSE believes that about 50,000 people will be affected by the strike by nurses scheduled to take place on Tuesday.

This is effectively double the number impacted directly by the previous work stoppage by nurses last Wednesday.

As part of an escalation of the dispute, the strike on Tuesday will affect people with appointments for rehabilitation and respite services.

Appointments for hospital in-patient operations, day case procedures and out-patient clinics will, with some exceptions, be cancelled for Tuesday.

Nurses are also scheduled to stage another 24-hour work stoppage on Thursday.

Meanwhile psychiatric nurses are to escalate their campaign of industrial action later this week, it has been announced.

The Psychiatric Nurses Association (PNA) said an overtime ban, which was scheduled to be in place for 12 hours on Wednesday and Thursday, will now run through the full day.

A 12-hour overtime ban will be in force on Tuesday.

The PNA is also due to hold three consecutive days of strike action on February 12, 13 and 14 February at the same time as Irish Nurses and Midwives Organisation.

Elsewhere, emergency department doctors have warned that patients could deteriorate and even die during the nurses’ strike unless arrangements are made to promptly identify those most at risk on arrival at hospital.

With members of the INMO set to stage two further one-day strikes this week, emergency department doctors say their concerns are growing over the lack of adequate triage arrangements for patients presenting during the strike.

The Irish Association for Emergency Medicine says hospital emergency departments risk becoming “battlegrounds” during the dispute because of the difficulties in deciding which patients get prioritised.

It warned of “very significant disruption” to emergency departments.

The association’s president, Dr Emily O’Conor, repeated a call for the nursing union to grant a derogation to emergency departments during its industrial action. Failing that, she said the HSE needed to put in place a clear and properly-resourced alternative plan.

The standard triage procedure operated in Irish hospitals, which is computer based, is entirely delivered by nurses, but during last week’s strike this function was provided manually by senior doctors in most hospitals.

The INMO said its members were not providing triage during the strikes “as a matter of course”, but that last week nurses at two sites provided cover due to a surge in patient demand or emergency issues.

The HSE said it was continuing to engage with the INMO to put in place arrangements for the safe provision of services in advance of Tuesday’s strike.

Taoiseach Leo Varadkar on Sunday rejected calls for an independent review of the striking nurses’ pay claim, but said the Government does not intend to withhold payments due to them under public sector pay agreements.

Mr Varadkar said he regretted the enormous inconvenience to patients caused by the strike. Even if the next one-day strike was to be called off, it would be too late to reverse the cancellation of thousands of patients’ appointments and procedures.

The HSE said it expected all hospital outpatient, inpatient and day-surgery appointments scheduled for Tuesday to be cancelled.

Members of the INMO are also planning work stoppages for three days the following week, on February 12th, 13th and 14th. On Saturday the union announced two extra days of strike action on February 19th and 21st.

It is also increasing the number of nursing services on strike from 82 to 240 from Tuesday. Most of the additional strike sites are respite services for people with intellectual disabilities and day services for the elderly.

The announcement followed a meeting of the INMO executive in Dublin on Saturday.

Plans by the union to extend the dispute to GP out-of-hours services and community nursing services remains the subject of discussions with the HSE.

The HSE said on Sunday it remained available to engage in any efforts to avert industrial action. Mr Harris expressed regret at the union’s decision to widen the strike.

The INMO is seeking pay parity with other graduate-entry health professional grades such as physiotherapists who it maintains are paid about €7,000 more than nurses.

The union argues such increases are necessary to deal with recruitment and retention issues in the health service.

Further disruption in the health service is expected when hundreds of GPs take part in a protest outside the Dáil on Wednesday. The National Association of GPs is campaigning to have cuts imposed on family doctors during the economic downturn restored.

A dispute involving some ambulance staff is expected to be escalated shortly, while industrial action by psychiatric nurses is ongoing.