Number on trolleys could pass 1,000 this winter, IMO event told 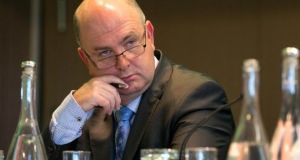 The number of patients on hospital trolleys could exceed 1,000 at times this winter, a doctors’ conference has heard.

Speaking at an event in Dublin organised by the Irish Medical Organisation (IMO), Dr Fergal Hickey of Sligo University Hospital said a problem with capacity in the health service was being felt in hospital emergency departments.

There were record levels of overcrowding in hospitals across the State last winter with some days more than 700 patients, who were deemed by doctors to require admission, waiting on trolleys in emergency departments and on wards for a bed.

Dr Hickey said the problem could escalate significantly over the coming months and there could be more than 1,000 people awaiting beds at times.

IMO president Dr Peadar Gilligan said that until the number of hospital beds was increased in line with recommendations made in recent capacity reports, overcrowding would continue to be an issue in emergency departments.

“There is a direct correlation between stripping out of resources and problems in the health service,” he said.

Dr Gilligan argued that the health service was not “a black hole” into which billions of euro was endlessly injected. He also said the depiction of the health service as “Angola” was not helpful as this suggested a hopeless scenario.

The chair of the recent all-party committee that drew up the Sláintecare reform plan and co-leader of the Social Democrats, Róisín Shortall, said she was “somewhat nervous” about next month’s budget given the spending overrun in the health service and the pressure being placed on the Department of Health by the Department of Public Expenditure as a consequence.

However, she said Taoiseach Leo Varadkar had in 2015, while he was minister for health, argued that reform had to be funded.

She said a budget needed to be provided to start the implementation of the reforms. “Government would be very foolish to miss this opportunity,” she said.

The IMO conference was also told that Ireland’s rehabilitation sector ranked last in both doctors and beds per capita among European countries. The lack of specialists in this area was also said to be compromising the delivery of care.

Dr Raymond Carson, of the Mater Hospital, said the “historically neglected” area of rehabilitation was seeing demand increase but that there can be a “seamless pathway to care in the home”.

Dr Padraig McGarry said that “well-trained GPs are leaving Ireland due to conditions, access to diagnostics and reality of burden on practices”.