‘Not clear’ if €38m Eircode benefits will be achieved - C&AG

Consultant contracts worth €420,000 given without competitive process, report finds 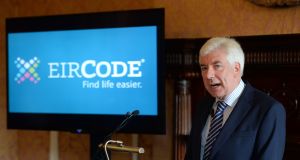 The real cost of Ireland’s postal code project, Eircode, is around €38 million and it is not clear the expected benefits will be achieved, the Comptroller and Auditor General (C&AG) has found.

In his annual report for 2014, C&AG Séamus McCarthy said improved data matching was expected to be the main public sector benefit for the project, but Revenue has indicated this had largely been achieved through other developments, including the Local Property Tax register.

“It is not clear that benefits to the value projected [€6 million to €20 million] will be achieved as a result of the implementation of Eircode,” he said.

Eircode, the postal code project, was first mooted in 2006, and there were significant delays before its ultimate launch in July this year.

The C&AG’s report said the project costs increased substantially compared to the estimates on which the decisions to go ahead with it were based.

In 2009, the estimated cost of the project was €18 million over 18 months. Based on a review of costs to date and the outstanding obligations on current contracts, the cost is projected to be around €38 million.

The report highlighted fees paid to consultants, including €1.5 million to PA Consulting. He said the company had “effective continuous involvement with the project” under four contracts beginning in 2006.

The report raised concerns about two of the four contracts, including one, worth €54,000, that was issued in 2008 without a competitive process.

Six other consultants were also given contracts, worth more than €420,000, without the use of a competitive process.

Two of the consultants were retired civil servants and one was a retired public servant. They were paid €145,000, €38,000 and €137,000 respectively. A contract awarded to another consultant, who began working on the post code project in February 2014, will cost approximately €200,000.

The report said Government departments are required to supply an annual statement of contracts to the C&AG if they have been awarded without a competitive process and are valued at more than €25,000.

But of the seven consultancy contracts that should have been included, the Department of Communications supplied only two.

Progress to completion was interrupted or delayed for reasons including difficulties in agreeing terms and conditions with GeoDirectory, a directory of locations and addresses. There were also delays with enacting required data protection legislation and difficulties with tendering and procurement of a licence holder, with Capita Ireland eventually chosen.

The report said risks to the project were identified at an early stage, in 2006.

“Notwithstanding these known risks, the Department did not deal with them in a timely manner,” it said. “Issues relating to access to GeoDirectory were not resolved until February 2015 and data protection legislation was only enacted in July 2015.”

The report also described “aspects of the procurement” associated with theproject as “unsatisfactory” including EU concerns about the licence holder tender, and “a pattern of non-competitive tenders for consultants engaged on the project.