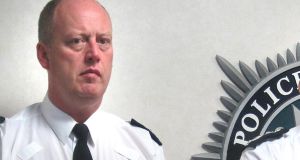 PSNI Chief Constable George Hamilton: “Violence and disorder in relation to the Twelfth is not inevitable.” Photograph: David Young/PA

The political atmosphere in Northern Ireland has deteriorated further after a DUP and Ulster Unionist Party decision to boycott today’s scheduled meeting of the North-South Ministerial Council in Dublin forced the postponement of the meeting.

The Dublin Castle meeting between Government and Northern Executive Ministers was called off after the decision earlier yesterday by the DUP and the Ulster UUP to pull out of Stormont talks on parades, flags and the past.

The cancellation of today’s meeting and the collapse of the political talks is part of what unionist and loyalist leaders have warned will be a “graduated response” to the Parades Commission decision yesterday to bar Orangemen from parading past the Ardoyne shops in north Belfast on the evening of the Twelfth of July.

Several days of serious loyalist rioting broke out last year in north Belfast after the Parades Commission made the same decision. Scores of PSNI officers were injured last year trying to police the determination. It also led to the creation of the Camp Twaddell protest site in north Belfast where Orangemen and loyalists have been based since last year’s decision.

The North’s new PSNI Chief Constable, George Hamilton, said police had been planning for “every eventuality” on the Twelfth. “Violence and disorder in relation to the Twelfth is not inevitable. Individuals have choices to make about how they conduct themselves.”

The DUP and the UUP were criticised by Sinn Féin, the SDLP and Alliance for their reaction which has heightened tensions in the run-up to the Twelfth parades and also raised concerns about the stability of the Northern Executive. “The institutions have been put under threat by the behaviour of the Parades Commission and those who threaten the Parades Commission,” Mr Robinson said. With a “combined” group of unionist and loyalist leaders, he accused the commission of caving in to the threat of republican violence.

“It’s up to us to seek a peaceful response and we trust that along the line, people will recognise the importance of having respect and tolerance for the cultural expression of our tradition and that violence will no longer be allowed to be the determining factor when decisions are being taken,” he added.

Deputy First Minister Martin McGuinness said he was disappointed that the meeting would not proceed as planned. “This is clear evidence that the Orange Order is now setting the pace for political unionism and the DUP in particular is now dancing to its tune.”

The meeting was to have focused on job creation, economic matters and EU funding for North-South projects.