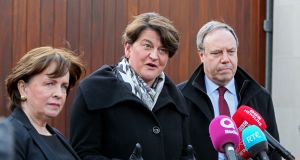 No Brexit deal is better than a bad deal, a leading Democratic Unionist MP has told his party conference.

MPs voted by 303 to 258 against a motion endorsing the government’s negotiating strategy.

With41 days to go until the United Kingdom is scheduled to leave the European Union, the DUP deputy leader said Mrs May will have their support if “necessary changes” are made to the backstop.

He told his party’s spring conference in Omagh, Co Tyrone, that they want a Brexit deal, “but we are very clear that a no-deal is better than a bad deal”.

“As we leave the EU — for us the guiding star is the union between Great Britain and Northern Ireland, ” he said.

“We will do nothing to undermine that Union.

“The only way to a majority in the House of Commons is with DUP votes. With necessary changes to the backstop, the prime minister will have our support.”

In her speech to the conference, Democratic Unionist leader Arlene Foster said her party will say no when the deal is “not suitable”, but will also “not be afraid to yes when the deal is right”.

“We will measure any new draft withdrawal agreement against our own tests of both protecting the Union and respecting the referendum result,” she said.

Mrs Foster added: “We must work for a sensible deal which works for every part of the United Kingdom.”–PA