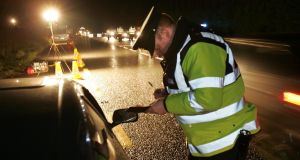 Since April 2017, when the Garda deployed roadside drug-detection equipment, 68 per cent of drivers who tested positive for drugs had a positive test for cannabis. Photograph: Frank Miller

Driving under the influence of drugs is now a major problem, with cannabis abuse nearly as prevalent as alcohol among samples taken from motorists.

Delivering the annual Road Safety Authority academic lecture in Dublin on Monday, Prof Denis Cusack said while alcohol remained the most frequently detected drug in blood and urine specimens, cannabis was the next.

Since April 2017, when the Garda deployed new roadside drug-detection equipment, some 68 per cent of drivers who tested positive for drugs had a positive test for cannabis, he said.

After cannabis, cocaine was the next most popular drug, showing up in 37 per cent of positive samples.

Other drugs which he said were appearing in analyses were benzodiazepines such as diazepam and flurazepam, opioids such as heroin and codeine and stimulants such as flephedrone.

Others noted were pregabalin or gabapentin, used in the treatment of epilepsy and generalised anxiety disorder; and zolpidem or zopiclone, used in the treatment of insomnia. He particularly warned against the misuse of over-the-counter medication which contained codeine and paracetamol. He said codeine would cause driver impairment while “paracetamol [abuse] will kill your liver” .

Prof Cusack said a 2018 analysis had shown that of 2,144 drivers who had not breached the blood-alcohol level, more then 1,500 – three out of four – had tested positive for drugs.

Both Prof Cusack and Asst Garda Commissioner David Sheahan said the introduction of roadside screening for drugs in April 2017 there has been a significant increase in the number of drug driving cases detected.

Prof Cusack said there was a question in relation to whether the figures were due to increased testing or whether they were due to a rise in drug use, and he concluded it was probably both. He said the rise in the incidence of cocaine in samples referred to the Medical Bureau of Road Safety by the gardaí between 2013 and 2018 “mirrored” the rise of Irish economic prosperity.

However, he said it should be made clear that those who are on prescription medication should not be worried about driving if advised by their doctors that it was safe for them to drive. He said there was a fear among motorists that if they drove while on medication they could be in difficulty when stopped by gardaí. But in fact the issue was driving “impairment” as well as testing positive for drugs. As long as the motorist’s driving was not impaired by medication they had nothing to fear, he said.

Prof Cusack said a number of issues arise from the findings and among them was the potential implications for road-safety policing if cannabis use was legalised, as was happening in other parts of the world.

A further issue which he identified was the need to tackle crossover impairment, for example where someone was at the legal limit for alcohol and testing positive for drugs. He said a graduated system of penalties could be considered in these cases.