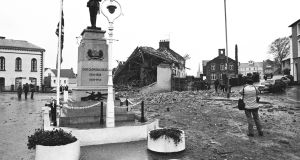 The scene of the Enniskillen bombing the day after the atrocity in November 1987. Photograph: Matt Kavanagh 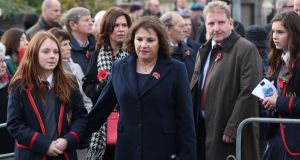 Stella Robinson (centre), whose parents Wesley and Bertha Armstrong were killed in the Enniskillen bombing, attends the unveiling of the new memorial. Photograph: Niall Carson/PA Wire

The Rev David Cupples was a young Presbyterian minister in Enniskillen on the day of the IRA Poppy Day bombing that killed 11 people and injured 63 others on November 8th, 1987.

A 12th victim, Ronnie Hill, died after spending 13 years in a coma.

Thirty years on, he led the service on Wednesday for the unveiling and dedication of a new memorial to the victims of the attack.

That week in 1987 was a time in which Mr Cupples had to try to cope with burying members of his flock and helping the bereaved and injured.

On Wednesday he recalled it as a time that “changed the lives of us all” and ushered many people into a “life of pain”.

There were different types of pain, he told the hundreds gathered in Enniskillen beside the war memorial for the unveiling.

Mr Cupples described the victims as “beloved family members, dear friends, kind neighbours” who were “slain by the hands of wicked men”.

The names of the dead are inscribed on the monument in alphabetical order under a dedication that reads: “The memorial is dedicated in loving memory to the 12 innocent civilians murdered by the IRA & in recognition of the scores of innocent civilians injured on Remembrance Sunday 8th November 1987.”

Local headmaster Ronnie Hill’s name is also on the monument. He was badly injured in the explosion and spent 13 years in a coma, cared for by his wife Noreen, before he died.

“Lest we forget,” reads the inscription at the base of a red poppy on the top of the memorial.

There were hymns and prayers and recitation of the poem Remembrance Day, written by Anna Dixon in the aftermath of the bombing. It was recited by Sharon Harrington Gault, daughter-in-law of victim Samuel Gault.

Mrs Dixon, who was also caught up in the blast, was joined at the service by her husband Jim, who suffered severe injuries in the attack.

In her poem, she had referred to the “crushed and broken” body of her husband taken from the rubble and thanked God that he survived. Since 1987, he underwent scores of operations for his injuries and remains virtually in constant pain.

No one has been convicted for the bombing.

During the solemn service, Jessica Murray, great-granddaughter of Wesley and Bertha Armstrong, sang Nearer My God to Thee. The memorial was unveiled by Viscount Brookeborough, the Lord Lieutenant for Co Fermanagh, who read a message from Queen Elizabeth. The queen said she hoped that the monument would strengthen the Enniskillen families in the knowledge that the “dead and injured are never forgotten”.

There was an added poignancy to the service in that the memorial has yet to find a permanent location. The organisers of the Enniskillen Memorial Project had hoped to place it outside the Clinton Centre – the site of the bombing – but so far there is no agreement on where it can be permanently placed.

A bugler from the Royal Irish Regiment played The Last Post and Reveille while two minutes silence also was observed.

The names of the 12 who died were then read out by Church of Ireland Minister John Stewart. This was followed by the tolling of 12 bells.

A piper also from the RIR second battalion played the lament Flowers of the Forest while family members and dignitaries laid wreaths at the memorial.

The service concluded with the Lord’s Prayer, the singing of Abide With Me, a benediction and the playing of the British national anthem by the Ballyreagh Silver Band.

Those behind the project said the monument would “serve as a daily reminder to current and future generations of the suffering caused as a result of the Troubles in Northern Ireland and a source of acknowledgment and recognition to all who have experienced loss and continue to suffer”.