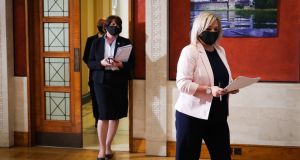 Fresh restrictions to limit the spread of coronavirus are to be been imposed in Belfast and other parts of Co Antrim.

The measures were announced following a meeting of the Northern Executive on Thursday, which also agreed an indicative date of September 21st for the reopening of pubs and bars not serving food.

Ministers agreed that the latest restrictions will apply within the Belfast City Council area, as well as the town of Ballymena and the adjoining postcode area of BT43, as well as in BT28 and BT29, which cover Crumlin and part of Lisburn.

In those areas, people from different households are to be prohibited from meeting in private homes, and the numbers allowed to meet in gardens will be limited to no more than six from two households.

There are a number of exemptions, including for child care and other caring responsibilities. People have also been advised to avoid unnecessary travel and to work from home where possible, and to limit visits to care homes and hospitals.

These were areas, First Minister Arlene Foster said, “where the spread is of particular concern, where cases are double or treble the average rate for the province”.

The measures will become law from next week and remain in force for a minimum of two weeks, but Ms Foster and Deputy First Minister Michelle O’Neill urged people to begin following them immediately.

Speaking at a Stormont press conference, Ms O’Neill described the new measures as “necessary and proportionate in the context of the public health crisis that is upon us”.

She said action had to be taken in the “hotspots” and warned that other postcode areas could be added. “It’s important that people who live outside these areas do not think that they are invincible.”

The North’s Department of Health on Thursday reported one further Covid-19 death, brings the total number of fatalities recorded by it to 568. An additional 78 people tested positive for coronavirus, bring to 8,035 the total number of confirmed cases in the North since the pandemic began.

Ms Foster also warned of the dangers of house parties and gatherings in private homes, which have been linked to the increase in cases.

The Police Service of Northern Ireland said it had issued 10 community resolution notices and eight fixed penalty notices after being called to house parties in the student Holyland area of Belfast in the early hours of Thursday. This follows a series of arrests for a number of offences in the area in recent day, police said.

Chief Inspector Gavin Kirkpatrick said they had given “advice and guidance at a number of residential properties” but “18 of those people we spoke with failed to understand the seriousness of the situation”, and at one house “we discovered a group of people hiding in a small bathroom”.

Ms Foster said: “The villain is not businesses, where customer behaviours are regulated. It is in our homes - it is the house party, it is the dinner party, it is a few people coming round for drinks or coffee.

“Complacency is our enemy,” she said, adding that everyone in Northern Ireland should “think carefully about your actions” and “ensure you do the right thing to protect yourself, to protect others.”

Father unaware partner and baby dead until gardaí called to raise alarm 13:21
Science Week 2020 to stage hundreds of virtual events all over Ireland during November 13:10
Westmeath nursing home says it is managing Covid-19 outbreak 13:29
One of country’s main labs unable to process Covid-19 tests over weekend due to staff shortages 12:56
Golf and tennis clubs closed under Level 5 as deemed ‘non-essential’ services 12:23