Cells with showers and toilets mean prisoners won’t have to slop out, says governor

Governor Patrick Dawson holds an open day at the new prison to showcase its facilities which include exercise yards and a gym. Pics: Provision 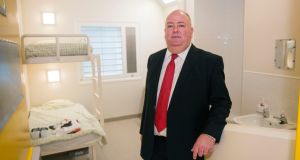 The governor of Cork’s new €45 million prison has said the replacing of the existing building, which dates from Victorian times, will lead to major improvements for both prisoners and staff.

Pat Dawson said the new prison, which caters for 275 prisoners in 12sq m cells equipped with toilets and showers, will mark a major advance on the existing prison site where inmates have to use a chamber pot and slop out every morning.

“The provision of toilets and showers in cells for prisoners has a knock-on effect of improving the environment for everybody so you don’t have the shameful scene of prisoners having to carry chamber pots down to the end of the landing every morning,” said Mr Dawson. Staff will no longer have to endure the terrible smell that emanates every morning from the prisoners having to slop out, he added.

Speaking during a tour of the new facility, which opens on February 12th and was built by PJ Hegarty & Sons, Mr Dawson said the new prison had a number of specialist cells including two for disabled persons, eight for segregation and seven high support cells for people with, for example, mental health issues. The prison is located on a 2.75-hectare site on the Rathmore Road, which is opposite the existing prison, where there are 150 prisoners. The number has passed 300 inmates on occasion.

Built as detention unit by the British army in 1806 as part of its Victoria Barracks, the barracks was taken over by the Irish State in 1922. In 1972 the Army handed over the detention unit to the Department of Justice for use a a civilian prison.

The new prison is surrounded by a 7.5-metre high perimeter wall and monitored by 300 CCTV cameras. The exercise area is located between the two wings so it will be almost impossible for people to throw drugs into the prison yard as was a problem in the old prison.

Mr Dawson said the new jail had a number of visiting areas in which prisoners could meet their families. The transfer of prisoners will take place over the coming weeks while the old prison will be mothballed before the Irish Prison Service decides what to do it.

1 Coronavirus: Almost 60 new cases recorded in Italy as two die
2 Ryanair’s Michael O’Leary under fire for comments on Muslim men
3 Archbishop: Sex abuse of women by L’Arche founder ‘reprehensible’
4 The view from Clondalkin: If Sinn Féin don’t get in, ‘there will be marches’
5 Lithuanian man given until midnight on Saturday to leave Ireland
Real news has value SUBSCRIBE