Rise in anti-immigrant sentiment at the root of decision, according to diplomats 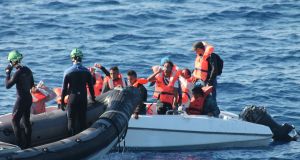 The European Union is ending maritime operations in the southern Mediterranean.

The change means that the Irish Naval Service ship, the LÉ Eithne, will not now be deployed as part of the mission, which is known as Operation Sophia.

The ship, a patrol vessel which already was involved in the rescue of over 500 migrants in the sea, was on two weeks’ notice to return at the end of this month. The ship and its crew of approximately 60 personnel will instead remain in Ireland.

The maritime aspect of the United Nations-mandated Sophia is ending because of rising anti-immigrant sentiment in many European states.

Air patrols trying to monitor the activity of people smugglers will continue, however, as will training aimed at bolstering Libyan efforts to staunch the flow of migrants taking to the sea.

Earlier this month, Italy said it would no longer allow rescued migrants disembark there. The country has recently seen a sharp rise in anti-immigrant sentiment that was reflected in the election last June of a coalition government including far right-wing elements.

Rome called for other countries to open up their ports instead, but no other EU states came forward.

EU diplomats said countries including Spain, France and Germany signalled they were not willing to host more rescued people – most of whom are fleeing wars and poverty in Africa and the Middle East.

The Defence Forces became involved in the crisis in the Mediterranean in 2015 when Naval Service vessels were dispatched in rotation, one at a time. The Naval Service role was confined initially to rescuing migrants at sea and was part of a bi-lateral arrangement with Italy, known as Operation Pontus.

Defence Forces personnel rescued some 18,000 migrants, either pulling people from the sea or taking them off small boats, which were often close to capsizing having been towed into open water and abandoned by smugglers.

At the same time, the much larger EU intervention known as Operation Sophia and run by EUNAVFOR Med, involved some 25 other States but with a wider mission, both to rescue migrants and disrupting the activities of people smugglers.

Ireland finally joined Operation Sophia in July 2017, participating in the surveillance, interdiction and rescuing aspects of it.

Operation Sophia’s mandate was due to expire on Sunday. It will continue for another six months with the same aim of deterring people smugglers in the Mediterranean but it will no longer deploy ships.

Instead, it will rely only on air patrols and closer coordination with Libya, Reuter reported EU diplomats saying.

“It is awkward, but this was the only way forward given Italy’s position, because nobody wanted the Sophia mission completely shut down,” one EU diplomat said.

A second diplomat confirmed a deal had been reached and said it must be endorsed by all EU governments.

Nearly 2,300 people died trying to cross the Mediterranean last year. From the more than one million refugees and migrants who made it to the EU during a 2015 crisis, sea arrivals dropped to 141,500 people in 2018, according to the United Nations.

While scaling back Operation Sophia, EU governments wanted the mission to continue because they felt it had been effective in dissuading smugglers. The compromise discussion in Brussels did not deal with military aspects of the role of air patrols.

But the new arrangement will involve more training of the coast guard in Libya, where lawlessness has allowed smugglers to openly operate.

It is not clear if any of this would involve members of the Defence Forces, either deployed in theatre or at operational headquarters.