Nationalists need Amazon ‘just as much as unionists’, says Foster 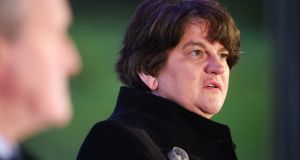 The DUP leader was speaking ahead of a meeting in London today between the European commissioner Maros Sefcovic and UK minister Michael Gove about London’s demands for changes to the protocol.

In a letter published ahead of the meeting, Mr Sefcovic rebuffed the UK’s call to reset the two sides’ relationship, saying Britain needed to honour the promises it made on Northern Ireland as part of the Brexit deal.

Saying that measures the UK previously signed up to “urgently need to be fully and faithfully implemented”, the commissioner rejected Mr Gove’s calls last week for significant alternations to the two-month-old deal.

The interruptions caused by the operation of the agreed Northern Ireland protocol are affecting consumers as well as manufacturers and importers in Northern Ireland, she said.

“There are now barriers between Great Britain and Northern Ireland, and of course that’s not acceptable for the greater number of people who live here,” she said.

Asked what she made Mr Sefcovic’s letter, she said: “Well, I wasn’t surprised, because I sat in on the meeting between Michael Gove and Maros Sefcovic last week and it really was an occasion of putting his head in the sand and his fingers in his ears.

“There was complete as if nothing had happened the Friday before in terms of the article 16 triggering by the European Commission, and that we should all just move along and pretend that it hadn’t happened. But worse than that, in his response to Michael Gove this evening, he’s actually asking for more protocols, so the answer to the difficulties with the protocol and the fact that we have this real problem for trade between Great Britain and Northern Ireland – in other words, internally in the UK single market – is actually more protocol,” she said.

“In fact, quite the opposite has happened. There are now barriers between Great Britain and Northern Ireland, and of course that’s not acceptable for the greater number of people who live here.”