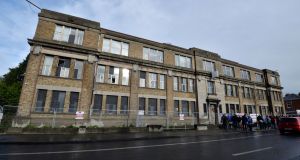 Nama sold the debt secured on the former John Player cigarette factory on the South Circular Road to US property investor Hines in a refinancing deal. Photograph: Alan Betson

The Dáil’s Public Accounts Committee is

highly critical of Nama over what confidential documents say are “unacceptable” delays to the delivery of housing on key sites it controls, including the Irish Glass Bottle Company site.

The documents, drawn up as part of PAC’s work programme argue that the sites have languished in development limbo.

They state that the committee is “of the view that delays to the development of sites, such as Poolbeg and Player Wills, for housing are unacceptable”. The committee, alongside the comptroller and auditor general, is one of two bodies responsible for oversight of Nama.

PAC, according to the document, will recommend that Nama “prioritises engagement with the local authorities, and other stakeholders, in order to ensure that all obstacles are removed to allow for development of these sites”.

Nama last year sold the debt secured on the first of these sites – the former John Player cigarette factory on the South Circular Road – to US property investor Hines in a refinancing deal, and no longer has control of it after being in control of it for a decade.

It has told PAC it doesn’t expect construction of any apartments in the Poolbeg West Special Development Zone, where it controls some lands including the former glass bottle site, to begin before 2020.

Nama was given an expanded brief in 2014 to facilitate the delivery of residential units amid the emerging housing crisis. It has directly funded the provision of 8,000 units since then, and provided sites for a further 2,500.

The committee will also criticise the oversight of Nama’s conflict-of-interest system, designed to prevent assets being sold by Nama from being purchased by people who owe money to the agency, or other “associated debtors”.

Nama requires those purchasing assets to sign a declaration that they have no connection to the assets being purchased which would contravene the relevant section of the Nama Act, section 172. However, PAC is set to strongly criticise Nama for a perceived failure to verify that the forms are accurately completed.

“The lack of systematic and routine verification of section 172 declarations was unacceptable,” according to the committee discussion document, which recommends that Nama put in place a system to verify the declarations it receives.

The “poor take-up” by local authorities of 7,000 units offered for housing by Nama is also set for criticism by PAC. The committee document recommends the Department of Housing should review the reasons given by local authorities for the non-acceptance of offers made by Nama.

The discussion document, drawn up to inform PAC’s conclusions on a range of topics on which it held hearings last year, also makes recommendations about the oversight of the €2.5 million budget used to fund the President’s office – the so-called President’s Establishment.

The document states PAC’s view is that it is “unacceptable” the internal audit committee overseeing this budget did not meet prior to 2018, and adds that a report of the audit committee should be published annually.

Regarding the two sites mentioned in the recommendations, PAC chairman Sean Fleming noted in a public session that loans secured on the Player Wills site were “fully repaid at a par value by the borrower in late December” that “Nama has nothing further to do with that site” and that the repayment of the loans was good news for the taxpayer.

Regarding Poolbeg, he noted that the planning scheme is currently awaiting clearance from An Bord Pleanala, and said that Nama chief executive Brendan McDonagh had written to him making the point “that the delays associated with that are not Nama’s fault”.

* This piece was amended to add extra information