Book of condolence opens after teen’s death, which ‘has really touched something in Belfast’ 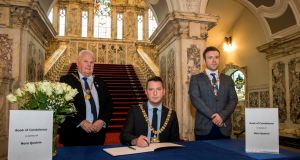 Nóra Quoirin’s disappearance and the discovery of her body has resonated with everybody in her mother’s native Belfast, the city’s lord mayor said on Wednesday as a book of condolence opened in memory of the late teenager.

The book opened at Belfast City Hall a day after the 15-year-old’s body was found in Malaysia, 10 days after she went missing while on a family holiday. Nóra’s mother, Meabh, is from the city and her grandparents and other relatives still live there.

Lord mayor John Finucane, who was the first to sign the book, said it was a “heartbreaking” case.

“I’m a father myself, but I don’t really think that makes any difference. This was a family who was on holiday, a girl who was vulnerable, and I think the family have been through hell in the past few days,” he said.

“As long as she hadn’t been found everybody hoped she would be found safely, and this really is a very tragic story.”

Mr Finucane said that the reward of some €10,000 donated by an anonymous Belfast businessman was evidence of the “large show of solidarity” with the Quoirin family in the city.

“The story itself has really touched something in Belfast, and I think we will see that with the messages of solidarity and support from Belfast,” he said. “I hope that from this point onwards the family get all of the answers and also the truth that they desire.”

Among those who came to sign the book of condolence was David Hynes from Belfast. “I wrote in the book that only a special person like Nóra could unite so many people with love, and I don’t mean special in the sense that she had special needs, I mean that she was a special person,” he said.

“When I saw the picture of her, it just brought tears to my eyes. She was a lovely wee girl. It felt very important to be here.”

He said the case had “annoyed and upset me all week”, and the fact Nóra had gone missing on the first day of her holiday “really got to me”.

“I was so proud when that Belfast business offered that reward,” he said. “I thought it showed another side of Belfast. Nowhere else put up money. But Belfast and Northern Ireland knows all about tragedy.”

Carter Wickham (18) came to sign the book of condolence with his friends.

“It’s a shock to everyone in Belfast,” he said. “It’s important to show a sense of solidarity and to show that everyone here is supporting her family.”

Reena Price said opening the book was “a nice gesture” and that the case was “absolutely horrific; it should never have happened”.

Pádraigín Drinan said she “just felt I had to come and write something” about what had happened. “The poor child,” she said.