‘My passport’s green’: why was Seamus Heaney used in Northern Ireland branding? 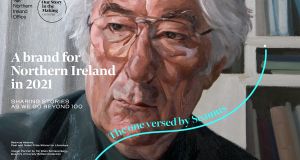 It is tempting to wonder what Seamus Heaney would have made of the controversy over the use of his portrait to promote the centenary of Northern Ireland.

“Seamus is so loved and revered, everyone wants a bit of him, including unionists,” says his friend and fellow poet Michael Longley. “I think he would probably have been embarrassed by his totemic status.”

This week, the most quoted of Heaney’s verses has spoken less of the rhyming of hope and history, and more of the gulf between identities and outlooks built into Northern Ireland’s DNA since its creation.

“Be advised, my passport’s green/No glass of ours was ever raised /To toast the Queen” was the clarification from Heaney following his inclusion in 1983 in an anthology of British poets.

The “passport’s green” quote was also used by the SDLP leader, Colum Eastwood, and others over the Northern Ireland Office’s decision to use Heaney’s image as part of the branding for the centenary.

The Northern Ireland Office, not the Stormont Executive, or the Assembly is the body in charge of the commemorations and other events to come, all under the tagline “Our Story in the Making: NI Beyond 100”.

“It’s a simple thing, but I think the word ‘our’ is very exclusive,” says Belfast-based marketing consultant Tim McKane. “Nationalists don’t see Northern Ireland as ours ... it’s so simple for people to say well, it’s not our story.”

And so they did. It was, said Eastwood, a “cynical attempt to co-opt Seamus Heaney’s image and reduce his work to a branding tool to promote that narrative about partition”.

The commentator Brian Feeney went further, describing it on the BBC as “cultural appropriation” and a “crass error of judgement” which was “unnecessarily divisive”.

The sense of indignation was increased over whether or not the Heaney family had been consulted about the photograph. They had not been. Permission was not sought from the family.

Instead, the Northern Ireland Office said it had received approval from the Seamus Heaney Centre at Queen’s University, Belfast, which owns the portrait. The failure to raise an alarm bell provoked incredulity in some quarters.

“Did anyone know that Seamus Heaney wrote a poem saying he would never raise a glass to the Queen, and if not, why not?” one figure told The Irish Times this week.

This was countered by Gavin Robinson of the DUP, who said the response of some politicians had “demonstrated a lack of generosity” and an “unwillingness” to demonstrate positive leadership.

“The branding for the centenary on this website is wholly inclusive and there rightly would have been much criticism had it been seen to only reflect those of us who strongly cherish and support being part of the United Kingdom. ”

Within the centenary organisers, McKane does not doubt that there was “a genuine will for this to be inclusive”. A Belfast-based firm had been used to create the branding, and the Northern Ireland Office had talked to people on both sides.

Yet his professional assessment is that the branding is “trying to do far too much. . .The first thing I thought is that there was a committee involved in this, because it looks like it’s trying to fit a lot of boxes”.

This is evident on the accompanying website, which explains that Our Story in the Making is “a brand for Northern Ireland in 2021”, created “in the spirit of inclusivity, mutual respect and optimism” and “respecting all perspectives”.

To do so, the brand will be “brought to life in stories”, including “the one versed by Seamus”. He and Mary Peters, who won a gold medal for Northern Ireland in the 1972 Olympics, sit alongside generic shots of the Giant’s Causeway, Derry’s peace bridge, and people representing the technology and farming sectors.

“I think they [the organisers] just thought, let’s get a Protestant and a Catholic, as anodyne imagery as possible,” says political commentator and Irish Times columnist Newton Emerson.

He argues that “making a big hoo-ha about it is a misinterpretation of what is actually going on”; the commitment made by the British government in the New Decade New Approach deal (which restored the North’s Assembly in January) was to “mark” it – “not commemorate, not celebrate”.

In this context, the campaign was “clearly as absolutely neutral as they could make it”, Emerson says, pointing out that the Northern Ireland Office is now the sort of place where a portrait of the Queen is removed from the walls of its Belfast headquarters, as happened last year.

The Democratic Unionist Party, he says, “wanted a UK-wide celebration, a Festival of Britain thing, and this is what they’ve got instead”. The lesson of the decade of centenaries has been that “the more cerebral you make it – boring, frankly – then the less flag waving and agitation it provokes”. For this reason, it is “so disappointing that nationalists aren’t getting involved”.

The Centenary Forum, the body set up by the Northern Ireland Office to plan the anniversary commemorations, contains no nationalist political representation; both Sinn Féin and the SDLP declined to take part.

“It’s no different to wanting unionists to attend the 1916 commemorations,” says Emerson. “It doesn’t make it more contentious when both sides turn up for an argument, it makes it less contentious, and when we look at something like the creation of Northern Ireland, nobody’s going to come away from that conversation feeling particularly triumphant.”

Historian Eamon Phoenix makes a similar point, emphasising that between July 1920 and September 1922, some 450 civilians were killed in Belfast in brutal sectarian violence. “You have to tell the story, warts and all,” he says.

He can still hum the jingle used for the 50th anniversary, “Ulster ’71”, with its exhortation to “Come and join in the fun”.

“You had this big forum in the Botanic Gardens [in Belfast] and the Ballymurphy massacre in the same week,” says Phoenix,

Longley draws the same parallel, saying Ulster 1971 was “tone-deaf”, with “a tacky fairground on the Lagan embankment, [the then-prime minister of Northern Ireland] Brian Faulkner bumping around in a dodgem car pretending to enjoy himself”.

“We can’t pretend it was all hunky-dory,” says Phoenix; the desire to avoid controversy means “we fall back on poets and sports stars, which has even turned out controversial in itself”.

Indeed, as a commentary on the UK government’s current preoccupations, says Phoenix, it reveals a concern for the union post-Brexit. “I suppose the idea is to remind people across the UK that this is a golden thread running through British affairs, the union of Britain, Northern Ireland and Scotland. ”

This week’s controversy will not have helped make that case, while the centenary organiser’s unfortunate handling of it all points to Northern Ireland’s great ability to create misery where there might otherwise be harmony.

Decades after he pointed out that his passport was green, Heaney did indeed raise a glass to the Queen in Dublin Castle in 2011. It was the right thing to do: “There was a world change as far as I was concerned,” he later said.

Today, Longley feels that Heaney would have searched for hope amid the history. “As his poems show, he retained tender feelings towards the Protestant neighbours of his childhood, but deplored the repressive, gerrymandered state that imploded in 1969. Generally speaking, doesn’t poetry – like all the arts – break down borders?”