Coronavirus: ‘Too much social contact’ recently, Holohan says as earlier restrictions on the cards

Chief Medical Officer Dr Tony Holohan has called on members of the public to plan ahead and limit their contact with others over the Christmas period as Covid-19 cases start to rise again. Video: RTÉ 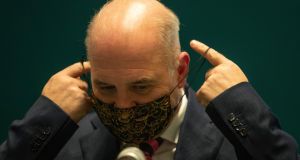 There has been “too much social contact” in the past two weeks, and the reproduction rate of coronavirus is probably higher than 1.3, chief medical officer Tony Holohan said on Friday.

Dr Holohan was speaking after it emerged the Government is to look at reintroducing some restrictions as early as December 28th following warnings from public health experts that infections from Covid-19 have begun to rise sharply.

Dr Holohan said social contacts had “significantly increased” over the past seven days, but they needed to be reduced to avoid greater risks from Covid-19.

Taoiseach Micheál Martin said on Thursday night the anticipated period of relaxed restrictions – which begins on Friday – would be shortened after warnings from the National Public Health Emergency Team (Nphet) and a meeting with the Dr Holohan.

There was a very strong likelihood that pubs and restaurants would not be open for the New Years, Mr Martin said on Friday to Newstalk Breakfast. Mr Martin said that under the proposed Level 3 + restrictions to be introduced after Christmas construction and non-essential retail would remain, but services such as hairdressers would have to be monitored.

Officials have said no decisions would be taken by the Government until next week, but there was a growing expectation that restaurants and pubs that serve food, which have been open since the start of December, would be closed again in the days after Christmas.

The rules on home visits are also likely to be tightened, with visitors from just one other household permitted, instead of three households from Friday. With concern about infections on New Year’s Eve pubs and restaurants could be closed as early as December 28th.

However Labour party leader Alan Kelly has called on the Taoiseach to hold a Cabinet meeting immediately to give certainty to the hospitality sector.

While he believed one should always follow public health advice, Mr Kelly told RTÉ Radio’s News at One that there needed to be balance between such advice along with business, mental health and other societal factors.“I will say it again, NPHET will advise, but the Government has to make decisions.”

Dr Holohan denied any sector was being “picked on” but added the more interactions in social settings where alcohol was consumed leads to people being less cautious about adhering to advice and keeping distances.

Speaking on RTÉ radio’s Morning Ireland said data had shown that social contacts had significantly increased in recent days and there was a need to reduce opportunities for social contact, in particular indoors.

It was difficult to maintain public health advice when the use of alcohol came into play, he warned. If given the opportunity the virus would transmit very quickly. There was still time to take action to stop the rise in Covid-19 cases, so that further restrictions would not have to be imposed, he added.

Earlier on Newstalk Breakfast Dr Holohan warned that the country could not afford “to do” Christmas or New Year’s in the usual way.

“We think it’s clear with the change in the infection that we have at the moment, with Christmas around the corner, that we as a country can’t afford to do Christmas and then the New Year after that in the way we normally do.

“We need to do something if we’re going to prevent a surge of infection in January. We think the length of time as we move today into a set of Christmas arrangements, the length of time incorporating both Christmas and the New Year, with what’s happened to the disease over the course of the last ten to 15 days, is simply too long.

Dr Holohan said if the current pattern of transmission continued, the ability to maintain essential public services such as childcare, education and health would be placed at risk.

Mr Martin repeated his call for the public to behave as if they had the virus so they don’t pass it on to others. People could still meet, they just needed to keep their distance. “You can engage with people, just watch the nature of that engagement.”

He said it was important for the Government to get the balance right, they wanted to give people a “meaningful” Christmas, but people needed to mind themselves, he said.

Mr Martin denied that the Government and Nphet are “scaremongering” with their warnings about transmission rates. The Government was going to “take on board” the advice of Nphet, he said. He had received “a heads up” from Dr Holohan and he had subsequently spoken with the two other coalition party leaders. Government officials will work over the weekend on plans to ensure there was a cushion to support businesses.

The Taoiseach said he wanted to move early to avoid ending up in a situation like in Northern Ireland and as had been seen elsewhere in Europe. At the moment hospitals in Ireland were holding up well and had managed to maintain non-Covid services during the most recent lockdown. “We’re learning all the time.

The move comes after Nphet announced 484 new cases of Covid-19 on Thursday night and a further three deaths. The reproduction number, a measure of how many other people a case infects, now stands at between 1.1 and 1.3, according to Prof Philip Nolan, chair of the Nphet epidemiological modelling advisory group.

The Government will also consider a recommendation from Nphet that inter-county travel be restricted after Christmas and before New Year’s Eve, and that people be asked to stay in their county again to prevent further spread of Covid-19 in light of the increase in new cases.

Under the existing plan to relax restrictions over the festive period, people were permitted to travel between counties again from Friday, allowing people to travel to see relatives and loved ones over Christmas.

Infectious diseases expert, Professor Paddy Mallon said that the sooner there is clarity about future restrictions the better for society and the hospitality sector.

While he understood the frustrations of the hospitality sector, the overall purpose of the message from Dr Holohan and Nphet was to give the sector “early warnings of what’s coming down the track” he said.

Speaking on RTÉ radio’s Today with Claire Byrne show, Prof Mallon said that everyone in the country, at all costs, wanted to avoid the need for to go back into Level 5 restrictions “because it affects everybody.”

Early identifiers of the sort of activities that were causing the rise in numbers had indicated that it was workplace parties and funerals that were part of the problem, he added.

“There was a specific reference to workplace parties - which don’t make sense and there was also a specific reference to funerals - they are early warnings that we as a public really need to take on board and if we continue with those sorts of activities - it’s that lack of personal responsibility from people undertaking those activities. It’s going to have an effect on everybody,” he added.

Prof Mallon said that hospitals have been seeing a steady stream of admissions. “Those numbers haven’t fallen, we’re coping with them, we’re seeing ongoing transmissions and ongoing outbreaks in healthcare facilities and as the numbers rise we will see the numbers increase. From the hospital perspective, we’re all worried, but at the same time we can see what the balance needs to be - the need to look at the wider picture.

“The focus needs to be on addressing the concerns to the people who make the decisions which is the Government and the Taoiseach.

“The sooner there’s clarity the better for everybody - it’s one of the difficulties we have with our national approach which is living with Covid which means the national direction is around rolling restrictions.”