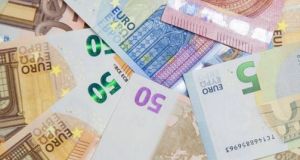 An economist has said that there are ‘significant risks’ involved in tax policy choices made by Ireland over the past three years that hugely affect our tax take from multinationals. Photograph: Getty

A decision by Minister for Finance Pascal Donohoe in relation to corporation tax could save multinationals from paying an additional €850 million in tax next year, the chairman of the Fiscal Advisory Council has warned.

Economist Seamus Coffey has said that there are “significant risks” involved in tax policy choices made by Ireland over the past three years that are hugely affecting our tax take from multinationals.

The issue of whether Apple has been able to maintain its low global corporation tax bill by using tax breaks accumulated by its Irish subsidiaries has been highlighted this week by disclosures in the Paradise Papers.

The disclosures have led to speculation that Apple has moved its hugely valuable IP to a subsidiary or subsidiaries that are tax resident in Ireland in such a way that they have accumulated Irish capital allowances worth tens of billions of euro, and possibly in excess of €100 billion.

In October Mr Donohoe decided to re-introduce a limit (80 per cent) on the amount of profit that a company could write off in any one year using capital allowances.

The limit, or cap, had been removed by the former Minister for Finance, Michael Noonan, in 2014.

Mr Noonan’s move meant that a company with sufficient capital allowances could pay no tax at all on the profit associated with IP expenditure, as against having to pay tax on a least 20 per cent of its profit.

Mr Coffey, in a report to the Department of Finance last year, urged the reintroduction of the cap.

Mr Donohoe moved on that recommendation this year but decided to only do on in relation to expenditure made after last October’s Budget speech, something that was not recommended in the Coffey report.

In 2015, the year after Mr Noonan’s abolition of the cap, the value of Ireland’s stock of intangible assets shot up by a massive €300 billion as multinationals responded to changes in the global tax environment by “onshoring” massive amounts of IP.

Writing in The Irish Times in a personal capacity, Mr Coffey quotesfigures from the Revenue Commissioners that show the amount of capital allowances - tax breaks - claimed by corporations also shot up in 2015.

They went from €2.7 billion in 2014, to €28.9 billion in 2015, meaning that a massive amount of corporate profit went untaxed and Ireland’s corporate tax take did not increase in a way that reflected the massive onshoring of IP.

However, the movement of the IP to Ireland affected the Republic’s economic statistics in such a way that the contribution to the EU’s budget increased by an estimated €200 million per annum, Mr Coffey said.

A spokesman for the Department of Finance said the 2014 abolition of the cap was designed to enhance the competitiveness of Ireland’s IP regime but that the cap was re-introduced following the Coffey report.

The re-introduction of the cap means the same amount of capital allowance is available, but must be used over a longer period.

“Changes to tax law are generally made on a prospective basis such that they apply only from the date on which they have legal effect,” the spokesman said when asked why the reimposed cap only applied to new expenditure. The issue of the cap is “simply a timing matter.”

However, Mr Coffey, writing in The Irish Times, said there are “significant risks” to this strategy as changes to US tax law, the value of the IP, or its residency, could mean that in the future, when the capital allowances are used up, the profits associated with the IP might still not generate additional Irish tax receipts.

“Ireland could be paying a huge price for a taxing option that could turn out to be worth far less,” he says, and recommends the re-introduction of the cap for expenditure that pre-dated Mr Donohoe’s reform.